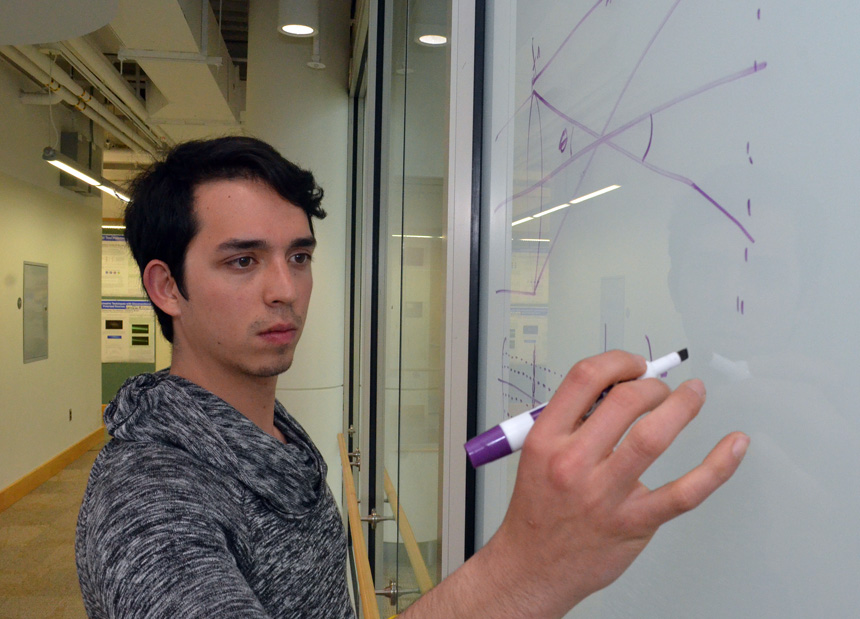 “This is extraordinary,” Pedro Vallejo-Ramirez ’16 of Optical Engineering thought to himself as he listened to Cambridge University Prof. Clemens Kaminski describe super resolution microscopy and its applications to neurodegenerative diseases.

“I want to be part of this research.”

That was last summer, when Vallejo-Ramirez, along with 75 other promising young scholars, attended the Optical Society’s weeklong Siegman School of Lasers in Amberg, Germany.

Thanks to the seed planted in Amberg, Vallejo-Ramirez will head to the renowned English university this fall as a Gates Cambridge scholar. He is only the third University of Rochester student to be accepted by the program.

He will pursue a Master’s of Philosophy in Cambridge’s chemical engineering department, doing research in biotechnology. After completing the year-long program in Cambridge, he will enroll as a PhD student in the Electrical Engineering and Computer Science department at MIT.

“And that is the plan for the next six years,” Vallejo-Ramirez said.

Making the most of an undergraduate experience

A similar seed was planted four years ago, when Vallejo-Ramirez arrived at the University of Rochester, knowing he wanted to pursue a degree in engineering, but knowing very little about optics.

Then, at an orientation event, he ran into Prof. Wayne Knox, who was encouraging other incoming engineering students to stop by his introductory optics class the next day.

That class “completely blew my mind,” Vallejo-Ramirez later recalled, and convinced him to pursue a major in optical engineering.

What happened between then and now might very well be a textbook example of how to make the most of a four-year undergraduate experience.

Freshman year: “I was laser focused on being the absolute best in my classes, and learning the material in those classes from top to bottom and inside out. Reading, doing problem sets, getting my feet wet in research.” If anything, Vallejo-Ramirez acknowledges, he may have pushed himself too hard, sacrificing sleep and social life.

Sophomore year: With a better handle on what he needed to do academically, Vallejo-Ramirez embarked on “entrepreneurship 101” as a founding member of Ovitz, a student startup company that developed a handheld device for vision testing. Not all of the lessons were pleasant: Vallejo-Ramirez had to walk away when forced to choose between working for Ovitz or being a student full time. Nonetheless, the experience was “an important stage” in his growing interest in entrepreneurship, he said, helping him realize “yes, I can do this.”

Junior year: Starting with a summer internship at FiveFocal, an optical software company in Boulder, Colorado, Vallejo-Ramirez devoted this year to better understanding optics from an industry perspective. “How do you go from ideation to prototyping to marketing in large volumes?” He also formed connections with as many people in the field as possible, learning about different career paths. The OSA school on lasers the following summer convinced him “I still have a thirst for so much more education in optics and in the other fields that complement it.” He decided to pursue a PhD.

Senior year: Knowing he will be “immersed in a highly academic environment next six years” he structures his final semester so he has time to think about his future, do more with friends, and take a course in capoeira -- Brazilian martial arts. “In a PhD program it is good to have hobbies outside of your studies. I am building new and healthy habits from this semester onwards,” Vallejo-Ramirez explained.

What lies beyond the PhD?

Vallejo-Ramirez would eventually like to be a biomedical entrepreneur, developing new medical devices and techniques. That’s why he chose MIT for his PhD program, he says, because of its solid academics closely integrated with a strong entrepreneurial climate.

He can see himself starting out in a well-established company, as a researcher or a manager in technical programs. But ultimately he would like to start his own company, perhaps developing a noninvasive optical device for early detection of skin cancer, “breaking some barriers and disrupting the market.”

Would he have done anything differently during his four years at the University of Rochester?

“I would have been a Meridian if I had had more time,” Vallejo-Ramirez confides, “because I wish I could give some tours and tell people how much I love this place.”