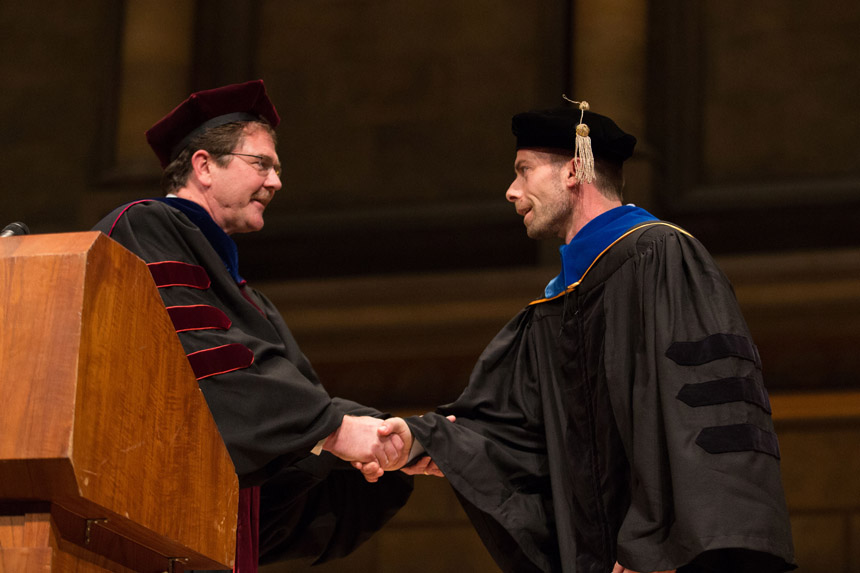 Nick Vamivakas, the inaugural recipient of the Edmund A. Hajim Outstanding Faculty Award, has levitated nanodiamonds with lasers,  and coaxed photons from an atomically thin semiconductor.

So do high school students who attend The Institute of Optics Photon Camp, where Vamivakas helps introduce them to a field where college graduates are in high demand.

No wonder Xi-Cheng Zhang, Professor and Director of the Institute, describes Vamivakas as “a great example of a highly successful junior faculty member. Nick's teaching and research are outstanding. He reflects the future of our Institute.”

Last year, Vamivakas, an assistant professor of quantum optics and quantum physics, was awarded the University’s G. Graydon ’58 and Jane W. Curtis Award for Nontenured Faculty Teaching Excellence. “Students say he is approachable and that he knows them well. He frequently polls his classes for feedback and makes course adjustments as needed,” the citation noted.

As a researcher, Vamivakas and his team study light-matter interaction at the nanoscale, with potential applications that include optical metrology, quantum information science, and a better understanding of the differences between “classical” and quantum physics.

He is PI or co-PI of a dozen grants totaling more than $5.5 million. This spring he was awarded a prestigious NSF CAREER award for “Quantum Photonics with Quantum Dots in van der Waals Heterostructures.” This project builds on his team’s discovery that when two layers of tungsten diselenide only a few atoms thick are overlapped, the interface between the layers creates regions, quantum dots, where stray electrons like to gather.

Vamivakas likens this to hills and valleys, with the layers of tungsten diselenide being hills. "Each time an electron falls into one of the valleys, it becomes trapped into a small region of space. Once trapped it can be coaxed to emit a photon (particle of light). If we can cause this to continually happen you have a stream of single photons coming out."

Photons are governed by quantum physics, not classical physics, which means novel, transformative applications are possible in fields as diverse as metrology and information processing. For example, imagine if one of these photon-emitting tungsten diselenide nanostructures could be substituted in place of lasers in integrated photonic chips, Vamivakas said. "You could do things like computing and information processing that would be much faster. You could solve problems that you couldn't solve with an ordinary electronic chip."

This will not happen overnight, Vamivakas cautions. The NSF CAREER award "is definitely a basic research project; there's not going to be a widget coming out the door.

"However, if we can understand the formation of these quantum dots, if we can control how they form and fine tune the colors of the photons that come out, we can start to try to marry this to particular applications."

In the meantime, Vamivakas notes in his project summary, these nanostructures offer a "rich condensed matter physics playground to explore the coupling of quantum dots and atomically thin semiconductors."