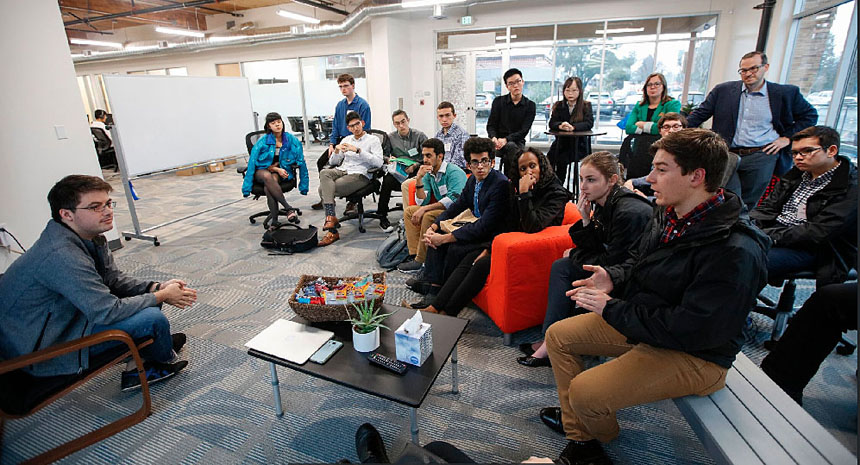 Students talk with Ian Christopher '10, at left, co-founder of analyticsMD, during an "industry road trip" to Silicon Valley and the Bay area organized by the University of Rochester's Gwen M. Greene Career & Internship Center. (Photos by Matt Wittmeyer)

'I can't emphasize enough how great this trip was'

The trip “exceeded my expectations by miles,” said Patrick Conway ’19 of computer science. “The greatest insight that I gained was the thought process people have when founding a startup . . . That feeling of controlling your own destiny is so empowering and intense, it makes me want to do something like that.”

Marty Guenther, the computer science undergraduate coordinator who also participated in the trip, described it as an “incredible opportunity” for students to:

“It was like being a kid in a candy store for a computer science major out there,” Guenther said. “It’s a young vibe.”

The trip included on-site visits to Google, Facebook, Twitter, Mulesoft, and Handshake, and also to a range of startups launched by University of Rochester alumni, including analyticsMD, Menlo Security, and Periscope Data.  A separate reception allowed students to interact with other alumni.

“The trip showed me the large variety of options that are available in terms of culture, work/life balance, team size,” says Christopher Dalke ’19 of computer science. “I have a much more nuanced view of the industry now that I’ve visited all of these companies. I can’t emphasize enough how great this trip was.”

“This trip was great for networking, developing communication skills and for learning about UI/UX in the workplace,” added Carolyn Zelicof ’19, also of computer science. “I would have never had visited companies such as Google, Facebook and Twitter as a sophomore in college and would have never been able to speak to so many people in these companies to gain their insight.”

The students included 11 sophomores and one freshman, reflecting the career center’s focus on engaging students as early as possible in exploring career options and developing career competencies.

The career center has sponsored similar industry road trips for University of Rochester students interested in biomedical engineering, in consulting, and in finance.

“This visit to Silicon Valley – and our other industry road trips – are the first of their kind at UR and a mechanism to better connect our students with alumni and employers who seek the talent we inspire here on campus,” said Joe Testani, the career center’s executive director.

Guenther praised the preparatory work done by Testani and Megan Vargulick, the career center’s director of employer and alumni connections, who also accompanied the students.

“The students were well prepared,” Guenther said.  “They realized this was an incredible opportunity that would impact their future career paths. Their insightful questions and enthusiasm at each company was a wonderful reflection of the caliber of students at the University of Rochester.”