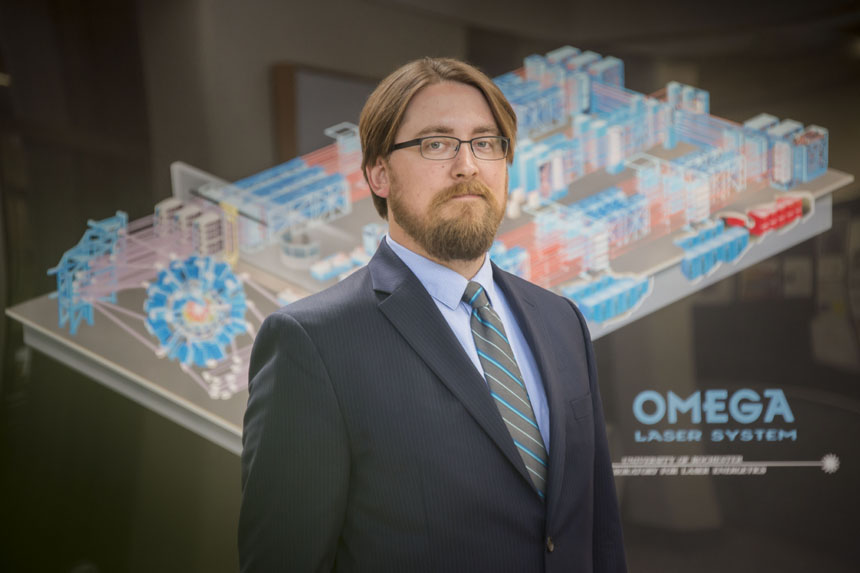 Adam Sefkow, an assistant professor of mechanical engineering at the University of Rochester and senior scientist at the University’s Laboratory for Laser Energetics, is being recognized with two awards for his research in high energy density physics and inertial confinement fusion.

He has received a prestigious Early Career Research Program award from the US Department of Energy. The award will help develop a hybrid fluid-kinetic multi-physics simulation code to help interpret data acquired from high-energy-density physics and inertial confinement fusion experiments at the Laboratory for Laser Energetics, the Lawrence Livermore National Laboratory, and Sandia National Laboratories.

The Early Career Research Program supports the research programs of outstanding scientists early in their careers, in disciplines supported by the DOE Office of Science. Sefkow’s research was selected for funding by the Office of Fusion Energy Sciences. The awards are for $750,000 over five years. This year 59 recipients were selected from among about 700 proposals submitted by scientists from universities and national laboratories throughout the country.

Sefkow will also receive the Fusion Power Associates 2017 Excellence in Fusion Engineering Award in recognition of his scientific contributions on a range of topics, including magneto-inertial fusion, short-pulse and long-pulse laser-plasma interaction physics, and intense charged-particle beam transport. The award also recognizes his leadership using computer code to predict the behavior of material, in collaboration with experiments at all three of the nation's flagship high-energy-density facilities.
Fusion Power Associates is a nonprofit research and educational foundation devoted to fusion development. The Excellence in Fusion Engineering Award recognizes scientists in the relatively early part of their careers who have shown both technical accomplishment and potential to become exceptionally influential leaders in the fusion field. The award will be presented to Sefkow at a ceremony in Washington, DC this December.

Sefkow, who received his PhD from Princeton University in 2007, was a principal member of the technical staff in the Pulsed Power Sciences Center at Sandia National Laboratories before joining the University of Rochester in 2016.

High energy density physics: Examines how atoms behave when squeezed to pressures more than a million—or even a billion—times the atmospheric pressure on Earth. This can lead to the creation of new materials and gives scientists valuable insights into the make-up of stars and planets, as well as the universe itself.

Inertial confinement fusion: The goal is to use high-power lasers to compress thermonuclear material long enough, at high enough temperatures to trigger ignition — resulting in an output of fusion energy many times greater than the energy required for ignition. If successful, this would provide a source of abundant, clean energy.