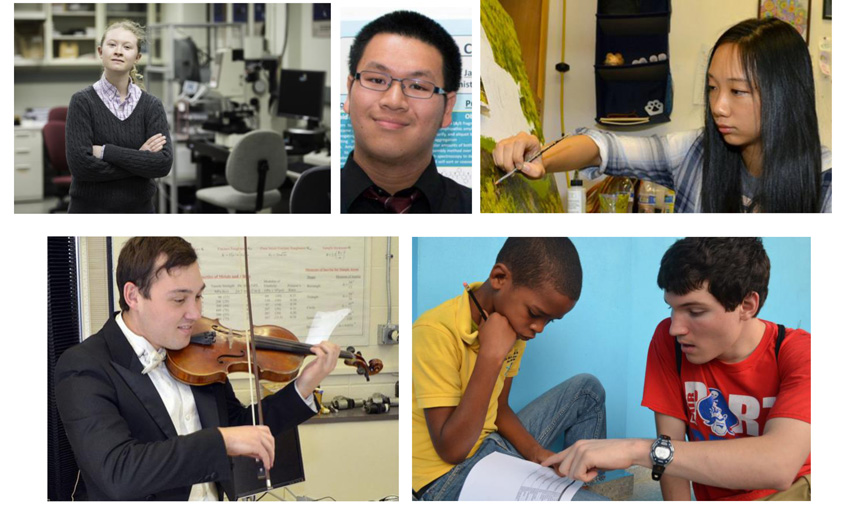 The Charles L. Newton Prize -- recognizing engineering students who show a special proficiency in an engineering subject and have conducted research, given a presentation or published a paper -- is awarded to Harrah Newman and Jinge Wang.

The Richard Eisenberg Engineering Award -- which recognizes hard-working undergraduates with an interest in metallurgy -- is presented to Meghan Patrick.

The Robert L. Wells Prize -- presented to senior engineering students for demonstrated competence in both engineering and the humanities -- is awarded to Ivan Suminksi and Ruoxue (Astra) Zhang.

The Tau Beta Pi Prize -- for Tau Beta Pi seniors who, through academic achievement, proven leadership and sterling character, have excelled and inspired fellow students -- is awarded to Rebecca Walton.

The G. Harold Hook Prize -- presented to a student who has demonstrated outstanding interest in engineering -- is awarded to Jacques Kouevi.

Raymond Chin, Luke Dengler, Mollie Eva Hansen, and Fernando Suarez are inaugural NAEGrand Challenges Scholars for combining research, community-engaged learning, interdisciplinary experiences, entrepreneurship, and global experiences to address one of 14 Grand Challenges for Engineering in the 21st Century as identified by the National Academy of Engineering.

Albert K. Ackoff Award: Haberly Kahn, Unni Kurumbail
(For the third year student, based on grades through the fall the junior year.)

The American Chemical Society Chemistry Achievement Award: Anna Kopp
(For the senior with an outstanding academic record who has done excellent work on a research project or independent study in applied chemistry.)

Award for Outstanding Teaching Assistant:  Shir Maimon
(Given to a student who has provided outstanding support to professors as a teaching assistant, workshop leader and/or super leader during his or her undergraduate career.)

Excellence in Undergraduate Research: Vivian Li
(Given to a student who has worked with an advisor on significant research, received awards or presented at conferences, or been published as a result of his or her work.)

UR Women in Computing Leadership Award:  Vivian Li
(Given to a woman who has made a significant contribution to leadership, to the design of programs and activities that build a stronger community in CSC, and to a level of service and a creative enthusiasm for UR WiC.)

Outstanding Senior:  Edward Newton
(Given to a student who has made outstanding contributions to the Department and its undergraduate program in academics, research, and student leadership, and who has gained the respect and appreciation of the Department community.)

Outstanding Senior Award: Rebecca Walton
(Recognizes the graduating senior with outstanding aptitude and ability in all aspects of engineering.)

H.D. Polster Prize: David Lippman
(Awarded to a senior who has demonstrated through academic performance or a special project, unusual ability in the field of optics.)

Faculty Prize: Kaia Williams
(Awarded to a senior who best exemplifies the ideals of character, scholarship, and service.)

Fujimara Prize: Jocelyn Smith
(Awarded to a sophomore who represents The Institute’s values of academic excellence, research, and campus citizenship.)

Kevin Thompson Award: Xiaojing (Grayce) Huang
(Awarded to a student who demonstrates a keen interest in optical design and/or metrology.)

Britton Award: Cherine Ghazouan
(Awarded to a freshman who has excelled academically and, through his or her actions, demonstrates a keen interest in Optics.)