Members of the University of Rochester Engineers Without Borders (EWB) student chapter, back from their sixth trip to a school in the Dominican Republic, will return next year to make sure the water they are providing pleases the most important palates of all – those of the schoolchildren.

In January, six EWB members and their professional mentor visited the Escuela Taller Santa Maria Josefa Rossello primary school. They had planned the visit as a final monitoring and sign-off on a water disinfection system and new piping installed on previous visits to provide 400 pre-k through eighth grade students with drinking water.

Instead, they discovered that one of the school’s buildings was no longer getting any water at all. A separate well for the building, installed prior to the EWB project, had not been dug deeply enough.

In addition, children were refusing to drink the disinfected water being supplied to the rest of the school. The water was too “hard” – about 420 mg of calcium per liter. That’s not a health risk, but it can definitely leave a metallic taste in your mouth.

“The children thought the water wasn’t clean,” says Joshua Batres ’22, an engineering science /business major and business manager for the chapter. The school had to continue buying bottled water at a high cost. “Basically, all of our previous work would have gone to waste if we didn’t address this.”

To deal with these issues, the students connected a high-pressure faucet in one building to supply the building without water, explains Nathan Ward ’20. In the process they discovered -- and in some cases replaced --previously undocumented underground water lines. The students also capped off a line from the old well that connected to the rest of the system, and was responsible for traces of E. coli in the water.

Then, during a visit to Santo Domingo for other supplies, the students were referred to a water purification store.  The owner sold them a small ion exchange filter to attach to a single sink as a possible solution for the “hard” water problem. If it works, school officials will be able to buy a larger filter.

“One thing we are very grateful for is that the school is very committed to finding a solution,” says Fatou Diop ’20. “The beauty of this is, you encounter setbacks, but ultimately it helps move the project along.”

New projects on the horizon

In the meantime, the EWB chapter is exploring two new projects through Engineers Without Borders USA, which pairs individual student and professional chapters with specific community engineering or infrastructure projects.

One is a project to bring water to Naramat, a village in Tanzania. The Rochester chapter is hoping to raise enough funds to visit the village later this summer  -- basically a “go/no go” trip to determine if the scope of the project would be feasible for the students to tackle.

The chapter is also exploring opportunities to work with Taproot Collective, a Rochester nonprofit that designs and builds holistic systems for healthy local food, dignified housing, and educational opportunities in urban neighborhoods.

The Rochester EWB chapter, which recently celebrated its tenth anniversary, is interested in growing its membership, which now stands 26.

Though most members are engineering students, undergraduates from any discipline can join by contacting urengineerswithoutborders@gmail.com or dropping by the chapter’s meetings, held each Tuesday from 7:30 to 9 p.m. in Douglass Commons Meeting Room 403.

Being good at a lot of things

The biomedical engineering major, who plans to work in biopharma after graduating in May, says participation in EWB has opened his eyes to the complexities of solving engineering problems in the real world.  “I’ve gotten a lot out of this club, to the point I would say it’s equal in weight to my engineering education,” he says.

Diop, a chemical engineering major, agrees. “Engineers need to be good at a lot of things. When you end up leading a team through a project like this, there are so many things you need to consider: the community you are working with; how your project is impacting other people, and how to adapt and be respectful, especially when working with people from another culture.”

She plans to pursue a PhD in catalysis and nanotechnology, then work in industry, specifically on transforming CO2 into fuel. “Engineers Without Borders has motivated me to apply what I have learned.”

“We are very proud of this club,” Diop adds. “We’ve seen it grow from our freshman year, and it’s just amazing. The new students are so engaged.” 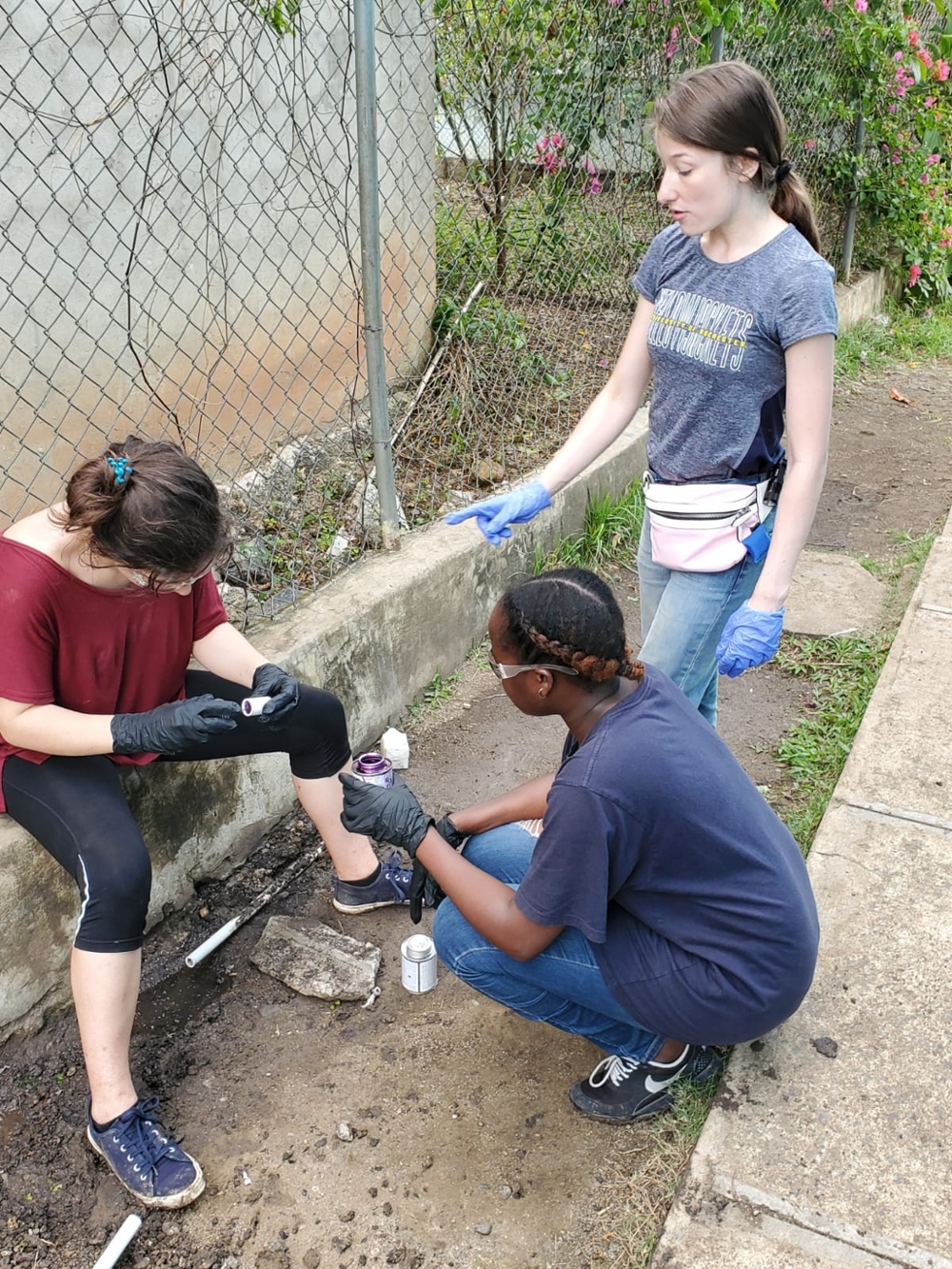 Participating in Engineers Without Borders on projects like the one in the Dominican Republic is a great way for students to qualify as Grand Challenges Scholars. Scholars address one of 14 global challenges identified by the National Academy of Engineering – such as providing access to clean water – by completing five competencies: participating in research, interdisciplinary study, entrepreneurship, global experience, community service.