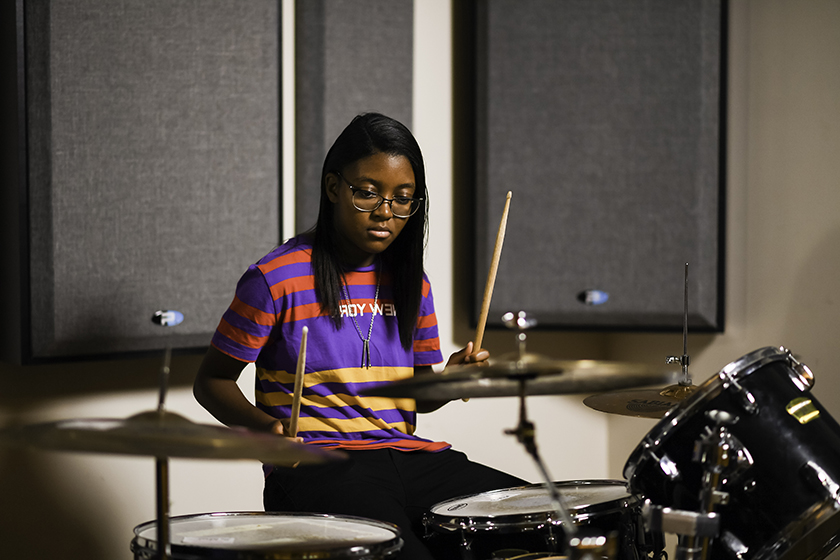 Sanaa Finley ’23 changed majors before even starting college, while taking part in the University’s Early Connection Opportunity summer program. “When a professor from audio and music engineering came in, I realized I didn’t have to give up music in college. AME combined two things I’m very passionate about,” Finley says.

Sanaa Finley ’23 arrived at the University Rochester in summer 2019 intending to major in mechanical engineering.  But she soon began to have doubts.

Then she heard assistant professor Michael Heilemann describe the audio and music engineering program—and immediately knew it would be a perfect fit for her, given her passion for music and her interest in technology.

This occurred during the Essentials of Engineering course—part of a four-week, Early Connection Opportunity summer session of lectures, workshops, and one-on-one advising.

The ECO program is offered to select students who are economically disadvantaged, first-generation and/or from diverse racial, ethnic, and cultural backgrounds before their first semester even begins.

The goal is to provide the students—many the first in their family to seek a degree—with the basic skills, resources, and confidence to navigate a collegiate landscape. An important component is helping students make sure they’re in the right major. Hence the presentations from each engineering department on what the different majors are all about

“The first semester can be particularly challenging for an engineering student,” says Nick Valentino, a Hajim School academic counselor who focuses on helping underrepresented minority (URM) students and veterans. “You’re taking math, which can be hard; writing, which can be time consuming; and an introductory course in engineering. And if you suddenly realize you’re in the wrong major, it’s going to seem insurmountable.”

The ECO program also offers a supportive shoulder if and when students stumble along the way.“ We know if they’re having financial issues; we know if they’re struggling academically, and we will reach out,” says Walisa Griffin, academic program coordinator of the Office of Minority Student Affairs, which administers the ECO program.

“We’re more aggressive in our advising because during those four weeks we really get to know these students, beyond just saying, ‘oh, you’re coming from this high school, and this is your major, so okay, if you need something, come find us.’”

The ECO Essentials of Engineering course is just one example of how the Hajim School partners with multiple University offices and departments to not only attract, but retain URM students—specifically African-Americans, Hispanics, Native Americans, Pacific Islanders, and veterans.

In recognition of these efforts, the American Society for Engineering Education last summer included the Hajim School in its first cohort of Bronze Award engineering schools that are “among the nation’s leaders in inclusive excellence.”  (Read more here.)

A major part of the school’s effort is its own STEM Gems initiative, which is extended to all incoming URM students. The initiative offers students three pillars of support: academic advising, mentorship from faculty and staff, and a sense of community.

ACADEMIC ADVISING: At the start of each school year, for example, Valentino and a graduate student email incoming URM students, inviting them to discuss the majors they’ve chosen, course selection, and proper math placement “which is such a good predictor of success, especially the first semester,” Valentino says. They regularly monitor if students are keeping up with their Blackboard assignments in the various introduction to engineering courses and a required, self-paced physics course. “That way we don’t have to wait for midterm warnings. We can have real time access when they start making mistakes and getting overwhelmed,” Valentino says. Counseling is then provided.

MENTORSHIP: As the students move into their sophomore year and beyond, undergraduate program coordinators and faculty advisors in the individual departments become more involved in tracking their progress. However, Valentino and other Hajim academic counselors will continue to help, especially if students are placed on probation. The school also makes sure that students dropped by a department remain registered with the Hajim School until they can be counseled about other options. “Unless we talk to them, sometimes they just leave the University, when in fact they may have completed 90 percent of the requirements for an engineering science degree,” Valentino says.

COMMUNITY: As Hajim School enrollments have increased—including an average of nearly 200 total URM undergraduates—it has found important allies in two student chapters. The National Society of Black Engineers (NSBE) and the Society of Hispanic Professional Engineers (SHPE) provide tutoring, peer group activities, and opportunities for members to attend national conferences. These activities help build a supportive sense of community for minority students, in addition to providing career and internship networking opportunities, Valentino says. The school helps fund many of these activities.

Other key partners include the Kearns Center, which has programs that help URM students prepare for graduate school and obtain hands-on mentored research experiences, and the Greene Center for Career Education and Connections, which assists students with career planning, internships, and job fairs.

“The biggest thing that distinguishes the STEM Gems program is that we’re focusing primarily on academic path and progress, because it is so essential that our underrepresented minority students graduate,” Valentino says. “If we have our eye on that, our other partners can help provide the other opportunities.”

The results have been encouraging. First-year retention of URM students has increased from about 50 percent for the Class of 2010 to more than 70 percent for the Classes of 2016–21. Second-year retention has also improved. Especially dramatic is the increase in the six-year graduation rate in a Hajim School major, from about 20 percent of URM students in the class of 2010 to nearly 60 percent now.

A lot of people are willing to help 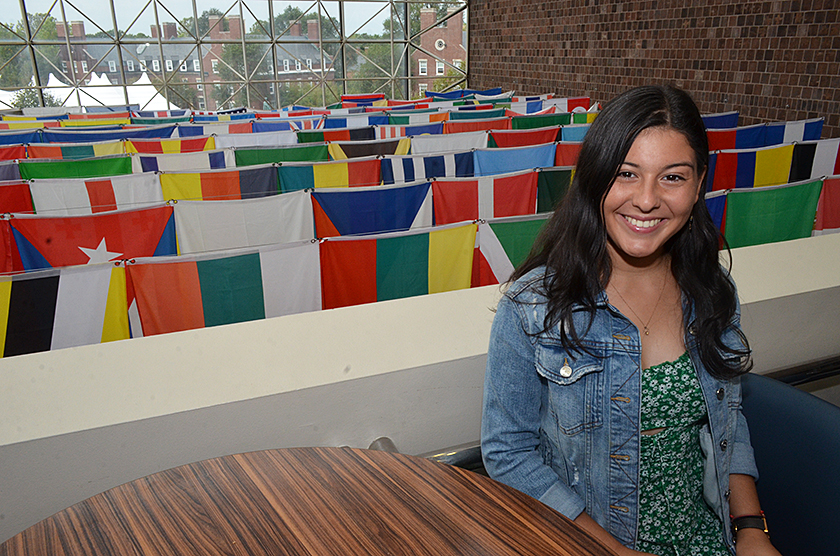 Camila Ruiz Vega ’22 of biomedical engineering was “a little unprepared when I got here,” but found plenty of support from tutors, academic counselors, and her undergraduate coordinator. She plays varsity tennis, is an accountant for the Student Association Finance Office, and regularly engages with SALSA, the student Spanish-speaking Latino community. Her ultimate dream is to set up a biomedical consulting company in Puerto Rico.

Camila Ruiz Vega ’22, a biomedical engineering major from Guaynabo, Puerto Rico, can testify firsthand to the support that is available.

“I was a little unprepared when I got here,” she says, particularly in math and science.”

So, she turned to the Center for Excellence in Teaching and Learning for tutoring help, and soon “caught up.” Valentino, she says, was the “middleman” who helped her organize her schedule to accommodate not only her biomedical engineering major but a minor in business.

Professor Edward Brown made it easy for her to talk to him during office hours or contact him by email to help answer her questions while taking his introductory course in biomedical engineering. And Taimi Marple, the biomedical engineering undergraduate coordinator, was her go to person with any other concerns. “She’s amazing,” Ruiz Vega says.

“Admitting I didn’t know how to do something and then saying it out loud and asking for help, took me a couple of tries,” she admits. “But if you ask, the Hajim School is a great resource for anything you might need.” “Engineering is tough and demanding, but you can do it if you organize yourself.”

And if you never forget there are a lot of people willing to help. 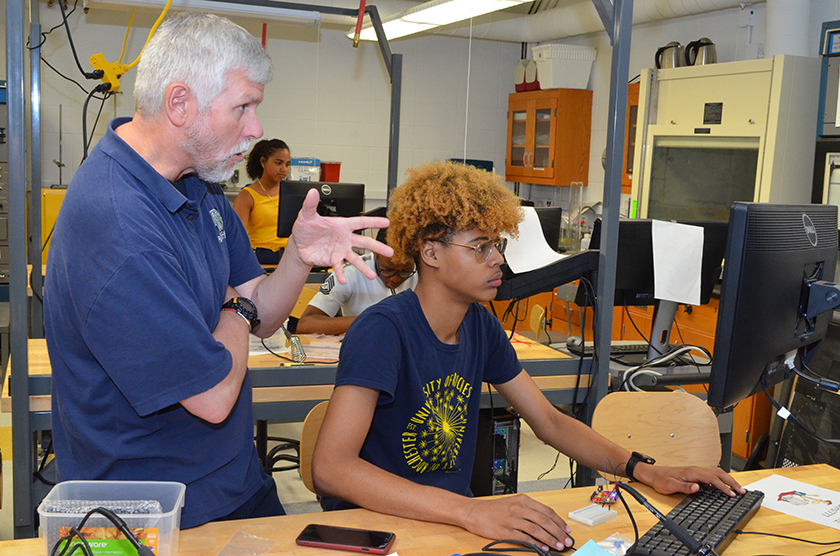 Jamal Archibald ’23 is assisted by Scott Russell, at left, a lecturer and senior technical associate in mechanical engineering, during an Arduino workshop. The workshop was part of the Essentials of Engineering course, offered by the Early Connections Opportunity program last summer. Russell has been working with ECO students for three years. “It’s a nice way of helping kids get started here,” Russell says. “My understanding is that many of them are the first in their families to go to a university. I was the first in my family to do that, so I can relate a little bit.”