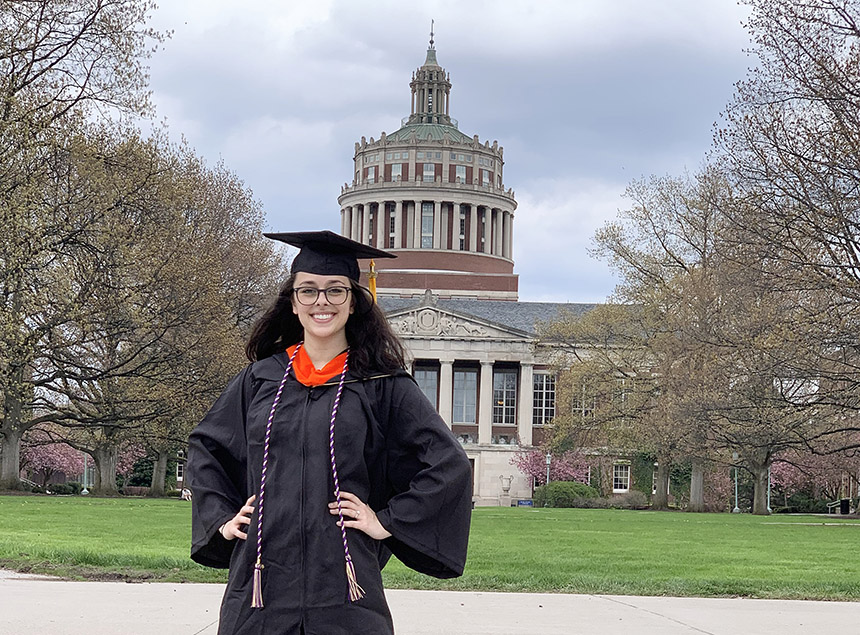 Tresa Elias ’20 received the Hajim School’s G. Harold Hook Prize, awarded to students who demonstrate above average interest in engineering, and have conducted research, given a presentation or published a paper. She also received the Department of Biomedical Engineering’s Faculty Award for Excellence in Undergraduate Research. She will remain at Rochester to pursue her PhD.

When she was a child, Tresa Elias and her father would visit the graves of her grandparents in Mt. Hope Cemetery. Even then she was struck by the beauty of the iconic dome atop Rush Rhees Library on the adjacent University of Rochester campus.

Not until high school, however, did Elias, born and raised in nearby Webster, NY, realize that the University was not only a beautiful campus, but a “perfect match” for her plan to earn a degree in biomedical engineering.

“Not only was it one of the best colleges in the area, especially for biomedical engineering and optics, but we have the Medical Center right across the street, which is perfect, and it was close enough that I could still live at home,” she says.

After two productive years at Monroe Community College (MCC), Elias transferred to the University of Rochester, and promptly began to make her mark.

Indeed, it would be hard to imagine a more glowing endorsement than she received from Edward Brown, associate professor of biomedical engineering, who welcomed Elias into his lab despite her lack of previous research experience.

“In the 14 years I have spent as faculty at the University of Rochester, plus the 6 years I spent as a post-doc and junior faculty at Harvard Medical School, plus the 6 years I spent as a grad student at Cornell University, I have interacted closely with more than 50 undergraduate researchers,” Brown wrote in nominating Elias for the Hajim School Hook Prize. “Tresa is the best of all of them. The rest are not even close.

“In that same period of time I have interacted closely with well over 50 grad students and post-docs, most of whom have gone on to secure faculty positions at leading institutions, or equivalent positions in industry, and I would place Tresa in the top 15% of that group in her potential for a productive research career, based upon her abilities right now, as an undergraduate.”

Getting her feet wet

Elias says her interest in science began at an early age, looking through her father’s chemical engineering textbooks from college. “I thought they were so cool with all the crazy math and figures,” she says.

In high school she took advanced classes in chemistry and physics, and “found that was what I was really passionate about,” Elias says.

When she did not initially qualify for the scholarships she needed to attend the University of Rochester, she instead enrolled at MCC as a more affordable option.

“It was a good experience for me,” she says. “It was a great way to get my feet wet in engineering. I was also president of the Society of Women Engineers club and was able to attend an international SWE conference in Texas, which was amazing.”

A strong GPA helped Elias earn the Phi Theta Kappa scholarship she needed to attend the University of Rochester. And the University’s 2+2 Dual Admission Program with MCC allowed her to take two BME classes at the University during her last year at MCC. As a result, when she began her junior year at the University, she did not have to take a heavy course load to catch up on BME sophomore classes she had missed.

One of the two BME courses she took during that last year at MCC was Biomedical Microscopy, taught by Brown. She aced the course, Brown says, but was “on the quieter side, and didn’t stand out.”

Not until she joined his lab did he fully realize what a “force of nature” Elias would be doing research.

In the classroom, engineering students are typically handed a specific problem and trained in how to arrive at a solution that is already known. In a research lab, however, it is often not clear what the problem is, or how it might be solved -- and even then, what steps should be taken and in what order, Brown says.

“I have had several students  who were in in my lab, or were coworkers during my own days of training, who were rendered paralyzed when their problems were not defined for them in clear, concrete chunks as in a homework set,” Brown says.

Elias, on the other hand, is “one of those rare and gifted students” who “brings an intellectual ability to solve research/engineering problems that is hard to teach, who can take this large unbounded parameter space and impose structure upon it, deciding what needs to be done, and then figuring out how to do it, and then executing.”

“Quite simply, Tresa was meant to solve science/engineering problems.”

Brown’s lab studies the use of multiphoton laser-scanning microscopy to study biological processes in living tissue.

Elias is ending her undergraduate work in the lab on a high note: She is first author of a paper now under review at BMC Cancer, based on her work exploring how light scattering from the collagen in archived tumor sections relates to breast tumor metastasis.

Her experiences at the University, and in the Department of Biomedical Engineering in particular, have been all she could have hoped for, and then some, Elias says.

“It’s been such a great community, such a family feeling, and I enjoy it so much.”

For example, Sandy Ruddy, the department’s student programs assistant, and Taimi Marple, the department’s undergraduate program coordinator, know Elias and other students on a first-name basis.  “I assumed that they see so many students on a regular basis, they wouln’t know who I am,” Elias says. “And yet, any time I go by the office to drop off papers, they recognize me by name and want to know how I’m doing. I’ll talk to Taimi about a scheduling problem or whatever, and a whole month later she’s asking ‘hey, were you able to get that taken care?’

“To see that in the office and see as well how the professors really connect with the students, it’s a really good sense of community,” Elias says. “It makes you feel very welcome. You’re not just a number.”

So, it is not surprising that she has no plans to leave the University.

She will stay to complete her PhD in biomedical engineering, mostly likely in Brown’s lab.  “There are five different projects that he’s offered me, and I would kind of want to do all of them if I could,” Elias says.

And beyond her PHD?

“I like to keep my options open,” Elias says, “But I could definitely see myself graduating with a PhD and doing a postdoc here, and eventually doing what Dr. Brown does, having my own research lab as well as teaching in the Department of Biomedical Engineering.

“I would love to remain part of the Rochester community.”