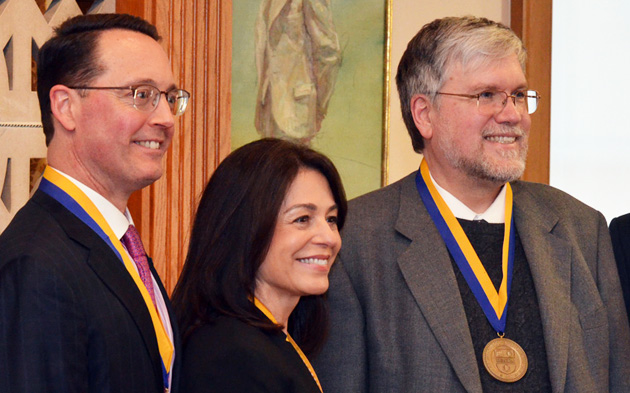 (Tim and Robin Wentworth, at left, with Henry Kautz at the formal ceremony installing Kautz as the Robin and Tim Wentworth Director of the Institute for Data Science.)

March 12, 2015 -- A year and a half ago, when Henry Kautz was still chair of the Department of Computer Science, he was asked to take the leadership of the University’s data science efforts by Rob Clark, the University’s Senior Vice President for Research and Dean of the Hajim School.

At that point he wasn’t given a staff, or even a new office, Kautz observed at his installation today as the University’s inaugural Robin and Tim Wentworth Director of the Institute for Data Science.

“But I was given one important thing: A promise. A promise that the University would marshal its benefactors, its alumni and, when necessary, would dig into its own pockets to support what we would create.”

The Wentworths’ $3 million gift to endow the directorship is a big step in fulfilling that promise, “helping to ensure that the Institute for Data Science and its activities will be a permanent part of this University,” Kautz said.

Kautz, who earned his PhD at the University in 1987, spent 14 years in private industry – including work as a scientist, department head and technology leader at AT&T and its Bell Laboratories – before joining the faculty at the University of Washington. He returned to the University of Rochester as professor and chair of Computer Science in 2006.

Clark described Kautz’s research as “expansive,” including such domains as data mining of social media for public health information, assistive technologies, and search algorithms. He has been cited more than 20,000 times for his work in artificial intelligence and pervasive computing.

The University’s $100 million Data Science Initiative is the centerpiece of its 2013-18 strategic plan. So far more than $75 million has been raised or received.

Construction of a state-of-the-art home for the Institute for Data Science is slated to begin in the summer of 2015, with a building dedication planned for fall 2016 and full occupancy by winter 2017.

As many as 20 new faculty – seven of whom were hired this year – will be recruited in departments in which data science and data analytics play a critical role, such as biostatistics, brain and cognitive sciences, computer science, physics, political science, psychiatry, and others.

New graduate and undergraduate degree programs in data science have been created.

In addition, new data science research collaborations are being established across the University, involving the School of Medicine and Dentistry, the Simon School, the College of Arts, Sciences and Engineering, and the Hajim School, Kautz noted. And new ties are being forged with industry, involving companies large and small, ranging from industry giants such as Microsoft and Google to “small but increasingly important” companies such as 1010data, he added.

A newly appointed External Advisory Committee for the Institute  -- including 10 leading experts in computer, information and data science from leading high-technology companies, industry and academia – recently convened for the first time.

“We are off to a great start, but we have much work ahead of us,” Kautz said.

“We will continue to investigate, to instigate, to analyze, to strategize and work to make the university a place that pushes the frontiers of knowledge in data science, but also a place that shows the world how data science can be applied to improve our health, our economy and our society at large.”