Back in 2000, the Department of Biomedical Engineering began with seven faculty members, a handful of students, and a tiny, one-room lab in the basement of Gavett Hall.

But that was about to change. In a big way.

And much of the credit for that goes to what a University publication has described as the “most ubiquitous innovation you’ve never heard of” – the invention of Blue Noise Mask by a professor and his PhD student in a different department – Electrical and Computer Engineering.

The “virtuous cycle” of research, invention and funding that Blue Noise Mask set in motion was celebrated this past week when Kevin Parker, Dean Emeritus of the School of Engineering and Applied Sciences and  the William F. May Professor of Engineering, and Theophano Mitsa ’91 (PhD) were awarded Eastman Medals by the University for their invention.

University President Joel Seligman said they exemplify “what we hope to accomplish as we go further in Data Science, as we go further in clinical and translational science across Elmwood (at the University’s Medical Center), and as we continue to amplify the significance of the Hajim School of Engineering and Applied Sciences. They are an illustration of the highest quality of research that one can envision, research that really has touched the world.”

Blue Noise Mask is a widely adopted half-toning technique that prints shades of gray in less time and at a higher quality than traditional methods; it has been licensed by more than dozen companies, including Hewlett Packard. (Click here to read more about the invention and its commercial impact.)

And it has generated in excess of $30 million in royalties for the University of Rochester.

That’s where the connection to biomedical engineering comes in. 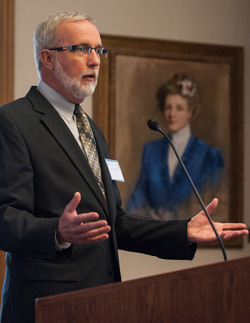 As BME chair Richard Waugh (shown at left) related at the award ceremony, the fledgling department was created in 2000 after receiving two, initial $1 million grants from the Whitaker Foundation.

When BME then approached the foundation with an even bigger $12 million request, to help fund a new building and further expand its faculty and programs, the foundation insisted the university demonstrate a serious, permanent commitment to the new program.

‘Kevin Parker, bless his heart, convinced the University to take $4 million from the Blue Noise Mask revenue and establish two endowed chairs in medical engineering as part of the match,” Waugh said.

It worked. A member of the foundation’s governing board later told Waugh that “no university had ever offered to establish endowed positions in a match to a Whitaker grant; if not for that commitment, we probably wouldn’t have gotten the award.”

No, BME did not get the full $12 million it wanted. But the foundation did provide $6 million, including $3 million as a challenge grant that helped build the Goergen Hall of Biomedical Engineering and Optics that the department occupies now.

“So in a very real way, Blue Noise Mask allowed us to go from the small space in Gavett Hall to the new facilities in Goergen,” Waugh gratefully acknowledged. “And with the additional space and new faculty, BME has really been able to flourish over the last ten years.”

It now has 15 faculty members, more than 70 graduate students and the largest undergraduate enrollment – more than 350 – of any Hajim School department.

But the benefits to the University from Blue Noise Mask did not stop there. The royalties also endowed three professorships in Electrical and Computer Engineering. They also provided funding for a new Theophano Mitsa and Kevin J. Parker Scholarship Fund, which was established in 2011.

This has set in motion the “virtuous cycle” that Parker envisioned: Royalties from a successfully commercialized University discovery are plowed back into faculty positions and research labs, sparking more innovative ideas, some of which can in turn be commercialized, creating more royalties  --  in other words, a cycle that is not only virtuous but continuous.

It is a concept that clearly resonates with Robert Clark, Dean of the Hajim School and the University’s Senior Vice President for Research. Clark  believes that “one of most important roles that a university plays in modern society is enabling an innovation economy that can grow our local economy and beyond.  But to do that, we pretty much have to open our doors and be an outward facing institution.”

At the time Parker and Mitsa invented Blue Noise mask, he noted, technology transfer at universities was still a relatively new concept.  ‘Universities were really just mobilizing tech transfer offices,  and thinking about how to move these ideas forward.” Clark applauded Parker and Mitsa for being among the “pioneering group of faculty in that era who saw commercial opportunity for their ideas and the impact it could have.”

“We owe a great deal to them.” 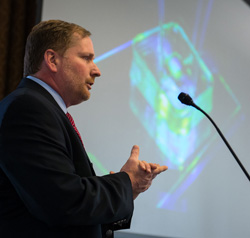 James McGrath (shown at left), a professor of biomedical engineering, is one of the faculty members whose laboratory was built with the help of funds secured with the matching funds from Blue Noise Mask. He said it is a “humbling experience” to reflect on the impact the invention has had on the University – and his own career.

His lab has developed nano-membranes that are a thousand times thinner than human hair, with pores that can reject certain biomolecules and let others pass. There are any number of possible uses, but the “Holy Grail” application that his lab aspires to is a portable blood dialysis device that people could wear on their belts, freeing them from the time-consuming, exhausting ordeal of traditional dialysis.

“I don't know if we’ll be able to do what Kevin and Theo were able to do, but I know it is important to try.  Engineering faculty – through the process of invention and development  -- have a unique ability to give back, as Kevin and Theo have done, to the community.”

Their legacy, he added “is not only in the buildings and the people of the University, but in the inspiration you have given to the faculty who are following behind you.”