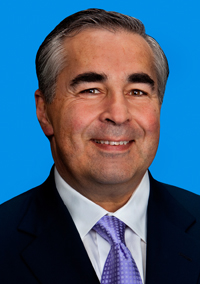 Jack Carmola is a retired former segment president for Goodrich Corporation, and president, Aerospace Customers and Business Development for United Technologies. He is currently working with private equity companies. He has more than 35 years of international business experience, primarily in the aerospace industry with the Goodrich Corporation and General Electric.

Carmola graduated from the University of Rochester in 1977 with a bachelor's degree in mechanical and aerospace engineering and a minor in geomechanics. He began his career with General Electric, on their corporate manufacturing leadership program, where he worked in various management positions within the company's aircraft engine business. During this time, he attended night school at Xavier University and earned his MBA with a concentration in finance in 1983.

In 1996, he became vice president of the Landing Gear Division of the Goodrich Corporation, a company that was transforming itself from a tire and rubber company to a pure-play aerospace company. He was elected an officer of the company in 2000 and appointed segment president in 2005. In the segment role, he was responsible for $3.5 billion in sales, 8,000 people, and 60 facilities with plants and customers all over the world. Carmola was part of an executive team that increased the market value of the company from $1.5 billion in 2003 to $18.6 billion when it was acquired by United Technologies, a deal announced in 2011. This deal was the largest transaction in the history of the aerospace industry.

At the University of Rochester, Carmola serves on the Hajim School Dean's Advisory Committee and is a member of the George Eastman Circle, the University's leadership annual giving society.

A board member of Mineral Technologies Inc., he has also served on the boards of several nonprofit organizations in the Charlotte, North Carolina area, including the National Public Radio station, Junior Achievement of the Central Carolinas, and the YMCA of Greater Charlotte.

Carmola lives in Charlotte with his wife, Cindy, and has two grown children.