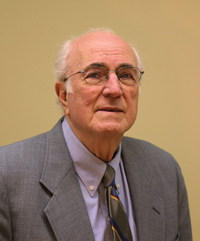 A revered instructor and an accomplished engineer, Pandeli “Lee” Durbetaki was a guiding influence within the field of mechanical engineering.

He also was a consistent supporter of the graduate fellowship/scholarship program at Rochester, establishing the Durbetaki Fellowship in Mechanical Engineering in 1990. Beginning in 1998, he was a member of what is now known as the Hajim School of Engineering & Applied Sciences Visiting Committee.

Durbetaki, who passed away March 27, 2019, was a professor emeritus at the George W. Woodruff School of Mechanical Engineering at the Georgia Institute of Technology (Georgia Tech). He conducted research primarily in the fields of stratified charge operation of spark ignition engines, irreversible thermodynamics, and homogeneous and heterogeneous ignition of fuels. He consulted on problems related to the flammability of carpets, injury from tar explosion, fire hazard criteria for noise control products in underground coal mines, manufacture of roofing material, and design and testing of traction-type transmission.

Durbetaki earned a bachelor's degree from Robert College Engineering School in Istanbul, Turkey, in 1951; a master's degree from the University of Rochester in 1954; and a doctorate from Michigan State University in 1964, all in mechanical engineering.

He was a faculty member at the University of Rochester from 1954 to 1960 and taught at Michigan State from 1960 to 1964. He then joined the faculty at Georgia Tech, where he directed the research of 54 graduate students; authored or co-authored more than 100 journal publications, conference papers, and research reports; and helped to engineer the 1996 Olympic relay torch.

His numerous professional honors included being named Engineer of the Year in Education by both the American Society of Mechanical Engineering (ASME) in 1985 and at the Metro-Atlanta Engineers Week in 1991. In 1987, he received the AT&T Foundation Award from the American Society of Engineering Education and the Ralph R. Teeter Award from the Society of Automotive Engineers. He received the Dedicated Service Award from ASME and the Distinguished Alumni Award from Michigan State University, Mechanical Engineering. He was a Life Fellow of ASME and has served and continues to serve in many roles at the local, regional, and national level. He was also a member of Sigma Xi, the international honor society of science and engineering. Throughout his career, he was director and officer of several professional, educational, and cultural foundations.

At the University of Rochester, he brought a rich perspective and sharp insight to his volunteer roles. For his remarkable professional accomplishments and willingness to serve his alma mater, Lee Durbetaki was among the Hajim School's most distinguished graduates.