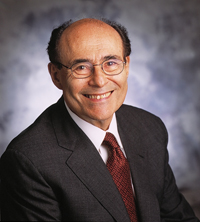 In the late 1950s, Robert Hopkins, director of the Institute of Optics, urged one of his students to do his PhD dissertation on a topic about which hardly anyone knew anything.

Robert Potter was that student, and the dissertation he completed in 1960 is believed to be the first written on fiber optics in the United States.

“We thought that someday people might be able to send information over single fibers or create images with bundles of fibers, so it might be an important thesis topic,” Potter said. The research addressed and described the details of the transmission characteristics of light in a single fiber, both experimentally and theoretically.

To put this in perspective, Potter’s doctoral thesis was completed fully 10 years before the first demonstration by Corning of low-loss optical fiber that made fiber-optic communications a practical possibility.

From Rochester, Potter embarked on a successful career in the business world, a path begun when Potter started his own photography business at the tender age of 12. Between 1965 and 1970, Potter worked on a variety of technologies and products, including optical card readers and the beginnings of optical character recognition machines, while rising up the management levels at the IBM Thomas J. Watson Research Center,

He then moved to Xerox Corporation for 13 years, beginning as the associate director of the Applied Physics Laboratory, then corporate vice president, and still later president of the Office Systems Division. During this period Potter managed the development of many of Xerox’ successful copiers and duplicators, then the first fax machines and the launch of print wheel electronic typing systems, then known as word processors, as well as the first laser printers using xerography.

In 1978, Potter left Xerox to become senior vice president of International Harvester in Chicago, where he served as the chief technical officer, responsible for the development of new technologies and product engineering and manufacturing processes of farm equipment, construction products and trucks.

Since 1982, Potter has held executive level positions in several companies, including group vice president of Nortel Networks, president and chief executive officer of (NYSE) Datapoint Corporation, and currently president of the R. J. Potter Company, a consulting firm that provides strategic, financial, and technical advice and assistance to a number of major US and international corporations.

He is a fellow of the Optical Society of America and has written more than 50 articles for various scientific, technical and business publications, including the first encyclopedia article on optical character recognition. He is often quoted in the public press and gives university lectures and private speeches.

Potter is recipient of the 1995 Rochester Distinguished Scholar award, which recognizes doctoral alumni who have led distinguished careers in academia, private enterprise, public service and the arts.