The recording studio at Gavett Hall resonates to the sound of a live performance by Bellwether Breaks.

The Rochester band is the second since COVID-19 protocols were imposed to perform as part of Open Sessions. The unique program gives University of Rochester audio and music engineering undergraduates a chance to apply the skills they’ve learned in the classroom by recording a live performance by regional professional musicians.

Singer Elyse Coughlin and instrumentalists Pete and Dave Goebel, Eugene Bisdikian, and Chris Coon are wearing masks and maintaining social distancing in the live room as they perform a medley of the group’s original songs, with a heavy nod to 50s/60s rock and soul sounds. During part of the session, Coughlin moves into an adjoining recording room where she can remove her mask. A monitor allows her to see and hear the other bandmembers.

But the music isn’t the only emphasis. During intermission, three audio engineering students—Grace Conheady ’21, Teghan Murray ’22, and Madeleine Vogel ‘22—have their moment in the spotlight, responding to a range of technical and artistic questions posed by audience members listening remotely by live-stream.

Vogel, for example, notes that the social distancing and masking requirements were probably the main complication in staging and recording the session. “Just the logistics behind bringing a group in for a recording (with COVID restrictions) is kind of a difficulty,” she says.

But the students agree the rewards far outweigh the challenges.

“This experience—especially during this time where there aren't many opportunities to record—is incredibly important,” Vogel says later. “It's worlds better to mess up your signal flow in an Open Session where others can help and you can make mistakes without fear—rather than on the job for a future internship.

“Additionally, live performances are so rare right now given the pandemic circumstances. Any opportunity to provide others with a ‘live’ concert should be taken!”

Adds Conheady: “Open Sessions challenge you to be a good engineer, but an even better professional, which is an experience that's more difficult to get in a classroom setting. It also opens up your musical palate to many incredibly talented Rochester musicians.” 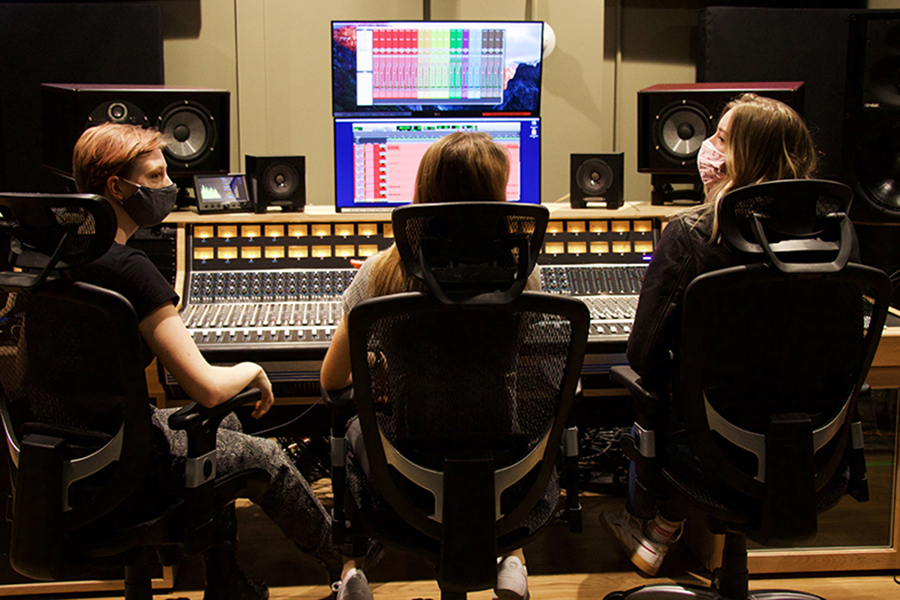 Perfect balance of ‘technicality and creativity’

“I’m a big supporter of our Open Sessions—it’s a great community-building activity,” says Mark Bocko, the Distinguished Professor of Electrical and Computer Engineering who spear-headed creation of the audio and music engineering program.

Launched in 2013, the AME program currently enrolls 67 students pursuing audio and music engineering as a major, and another 40 seeking a minor.

The program gives undergraduates the skills they need to enter—and keep up with—the rapidly changing field of audio and sound engineering. Those skills are needed not only in the recording, film, podcasting, and broadcast industries, but by any company that incorporates music and sound effects in its products—for example, producers of consumer electronics (e.g. cell phones and smart speakers), home entertainment, and video games; manufacturers of professional audio equipment and musical instruments; and computer and Internet companies like Apple, Amazon, Facebook, Google, and Microsoft.

Zach Uchima ’22, who handles the livestreaming for Open Sessions, says he was attracted to the Rochester AME program because it “has a stronger emphasis on the science of sound as well as the processing of digital audio than many other ‘audio engineering’ programs.”

Says Vogel: “I love being able to say that I can wake up on a Tuesday, attend a Digital Signal Processing lecture, grab lunch, and go right into a music theory workshop.”

This “perfect balance between technicality and creativity,” she believes, gives the program’s graduates “a leg up on others in the industry because of how well-rounded the degree is.”

Open Sessions date back to 2016. Stephen Roessner ’12 (MS), a senior lecturer and Grammy-winning audio engineer, was concerned that students in his courses on the art and technology of recording (AME 191) and listening and audio production (AME 192) “weren’t reaching out into the local music community to find musicians they could work with” for their recording and mixing projects.

He wanted to bring top bands to Rochester, and also make the sessions interactive, so that students from across the campus could sit in on the sessions—literally in the “live room” with the musicians as they performed.

Five Open Sessions were held in the recording facilities in Rettner Hall, starting with the Cape Wrath band from Philadelphia.

Then, after 2017, Roessner moved on to other projects and the Open Sessions lapsed. 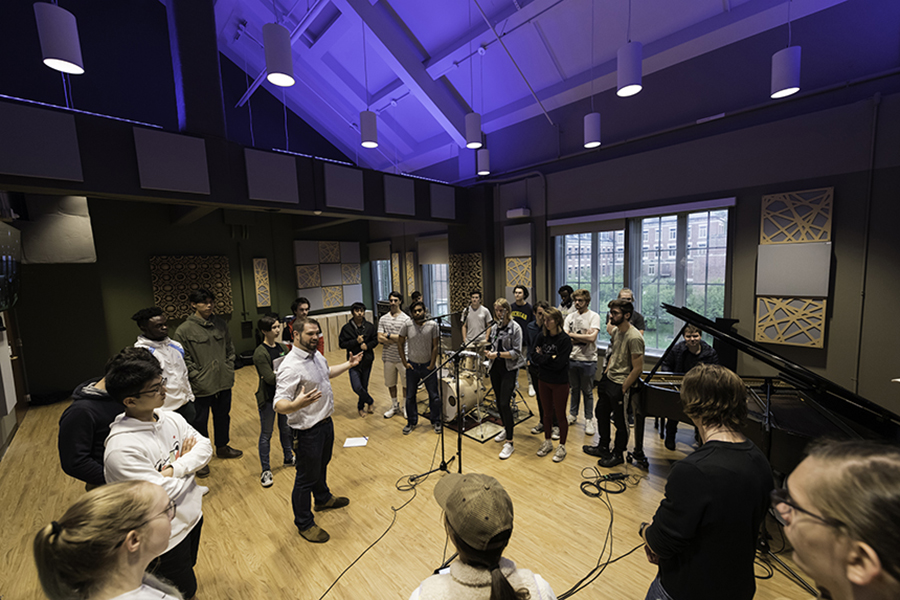 Stephen Roessner teaching a class in the Gavett Hall recording studio soon after its completion in 2019. (Photo by J. Adam Fenster/University of Rochester)

Making the most of a new studio

Two years later a new state-of-the-art studio was completed in Gavett Hall, part of a $3 million investment in recording and sound-design facilities for the audio and music engineering program.

Three AME students—Alexa Silverman ’21, Beau Hanson ’21, and Sam Schachter ’20 (now pursuing a master’s degree at the UR)—began brainstorming ideas on ways to maximize student use of the new facility.

They decided to emulate Snarky Puppy, a large jazz fusion band famous for “letting audience members come in and watch them record a session,” says Silverman, a marketing major pursuing a minor in AME. A keyboardist with UR student band The Recall, Silverman works for the Department of Electrical Engineering as its AME social media and communications coordinator.

“We wanted to create a program that put just as much emphasis on the engineering experience as it did the musician’s experience,” she says.

While similar to Roessner’s original concept of Open Sessions, there are important differences.

The biggest, says Silverman, “is how the Open Sessions are distributed and how they are marketed. We’re treating it like a record label. We distribute all of the sessions on Band Camp and we host everything on our website.”

Silverman and Roessner developed a contract by which both the artists and the engineers have ownership over the sessions. Engineers, for example, are free to mix, master, and release the sessions through Band Camp. “This gives the students a place to show, ‘Look what I did.

I recorded and mixed this or mastered this,” Silverman says. However, engineers are not allowed to release the sessions for profit.

The artists, on the other hand, are free to profit. They can release the session as is, request to have it mixed to taste, break it up and release different tracks from the session, or keep it in the vault.

Essentially, “the bands get a get free demo and the students get some practice,” Silverman says.

Only 29 of the 107 current AME students at Rochester are women, reflecting a national underrepresentation of women in the audio engineering field, and in STEM and technical fields. So, Silverman also has been attempting to address the underrepresentation in the AME program—and the local music scene in general—by making Open Sessions more inclusive.

“For a lot of students, especially the women students in the AME program, it’s tough to see the opportunities being constantly given to white males,” she says. “This semester we have been trying to have at least one if not more female students as a part of the engineering team for each of the Open Sessions.” 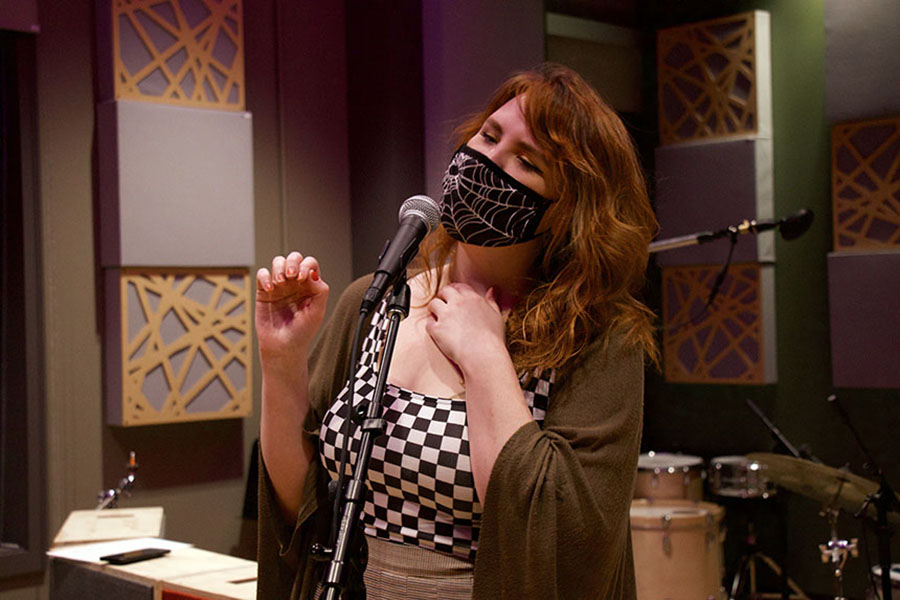 “Open Sessions was a great experience,” Bellwether Breaks singer Elyse Coughlin says. “The engineers were extremely knowledgeable and helpful. Their enthusiasm was contagious. The studio at UR has any equipment we could ever need for quality sound. We'd be happy to work with the folks there any time!" (Photo by Alexa Silverman)

Roessner, who oversees Open Sessions as executive director, says he is pleased with the changes the students have made.

“I’m really happy with the way Open Sessions is taking shape and growing,” he says.

“Alexa took this and ran with it; she’s done a wonderful job,” Roessner says. Silverman, who will enroll this fall in Berklee College of Music to pursue a masters degree in global entertainment and music business, is documenting her duties as marketing coordinator. The goal is to transfer that function to the student Audio Engineering Society chapter to help ensure the program continues after Silverman leaves.

Roessner has also been impressed with Uchima’s initiative in taking on the livestreaming.

The Bellwether session, in particular, helped get the word out that Open Sessions is back in business. More students are coming forward wanting to participate in engineering a session. And the Open Sessions inbox is flooded with inquiries from other bands that want to participate, Roessner says .

He’s hoping bands from across the country will want to come to Rochester for an Open Session, “to perform an early evening show” with the student engineers, and “then go play the Bug Jar or Montage later that night.”

Members of Bellwether Breaks can attest to the benefits awaiting other groups who participate.

"I couldn't be happier working with the AME students,” says Dave Goebel, the drummer and primary song writer. “Their energy, attention to detail, flexibility, and general knowledge was on point. I'm elated to see real bridges being built between University of Rochester music and recording, Eastman music, and the local Rochester scene.

“The students get real practice with real bands, and the bands get to play a unique show in an amazing space, plus have the raw and mixed audio, video, networking, and publicity. 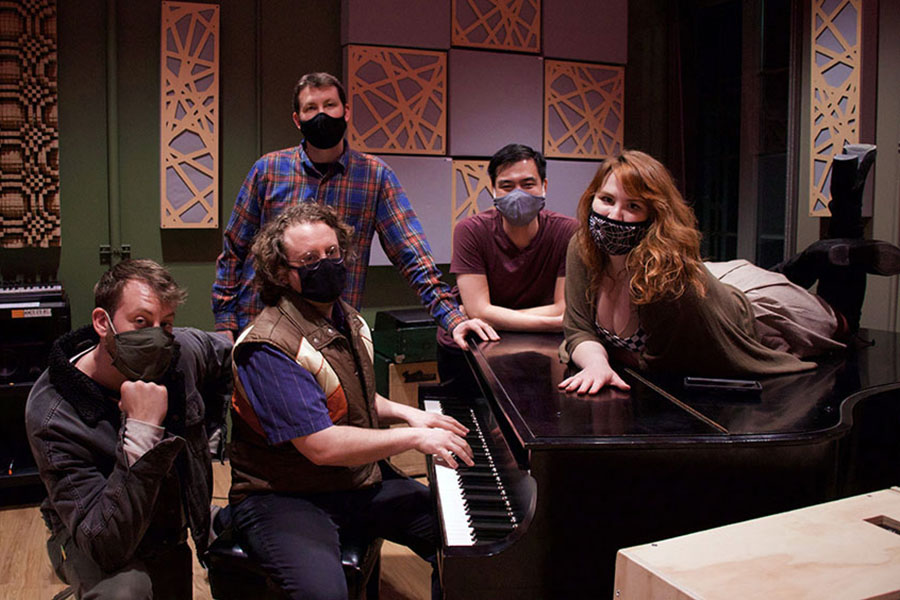