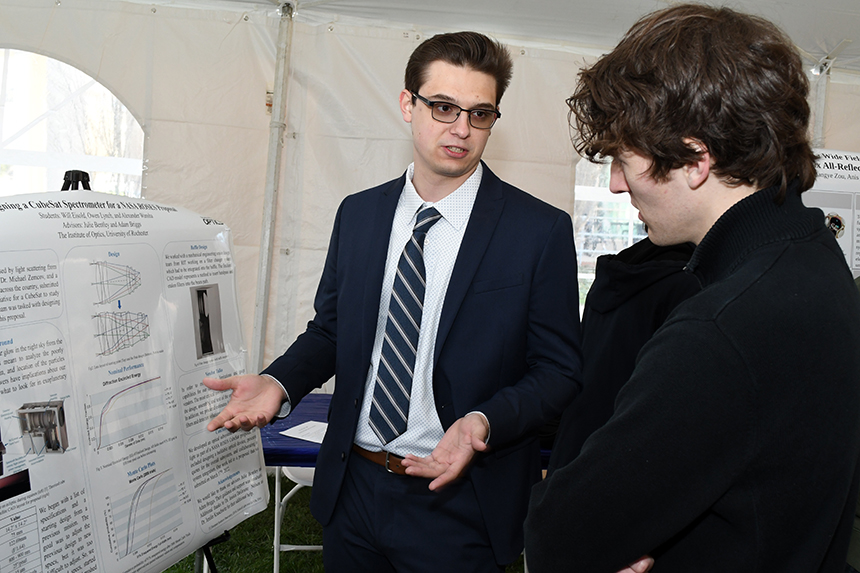 Alex Wansha describes the senior design project he worked on with fellow students Owen Lynch and Will Eisold. The team was tasked with designing the optical subsystem for a NASA satellite proposal to study Zodiacal light, a phenomenon caused by light scattered from interplanetary dust.

The summer before his junior year of high school, Alex Wansha ‘22 participated in the annual Photon Camp hosted by The Institute of Optics. The camp introduces high school students to the growing field of optics and optical engineering.

The weeklong program, which includes faculty lectures, visits to local optics industries, and hands-on laboratory projects, was a pivotal experience for Wansha.

“I stayed after one day and talked with some students who were looking over lens designs they had created. They took some extra time to show me what they were doing,” Wansha recalls. “And I knew then—with all the different specifications they were using and the abstract ways they were thinking—that lens design was something that I wanted to do.”

This month, Wansha graduated from the University of Rochester with a BS in Optical Engineering, and has a job awaiting him at Corning Inc. Most of his student loans will be paid with the Distinguished Lee Scholar award he just received from the Patrick P. Lee Foundation. The award recognizes students who integrate integrity, leadership, and service to others in their academic and personal endeavors.

“Alex’s thoughtful responses during the interview and his clear passion for engineering set him apart from the other candidates,” says Jane M. Mogavero, executive director of the foundation.

Wansha, who grew up in Irondequoit, a Rochester suburb, says he’s “extremely happy” with his undergraduate experience at The Institute of Optics, the nation’s oldest school of optics.

“There was a lot of hard work that went into it, but it’s been an extremely rewarding program,” Wansha says. “I was able to take a lot more optics electives than I ever expected to, and I made the most of them.”

He has also made the most of the opportunities for Institute undergraduates to work with some of the top researchers in the field of optics.

During his first year, for example, Wansha “put feelers out” to various Institute faculty members about possible openings in their labs. He got a response from the lab of Nick Vamivakas, professor of quantum optics and quantum physics, whose research interests span quantum optics, nanophotonics, and condensed matter physics.

“They do nanoparticle trapping, which blew my mind,” Wansha says. “I didn’t even know that concept existed before coming here, and it seemed like an amazing opportunity to jump in on. The research team seemed incredibly nice, a close-knit group, and so the rest was history.”

He has helped the lab develop a prototype of an optoelectronic PID (proportional-integral-derivative) system to minimize laser noise. He aided in building a device which launched particles off of a piezo-driven diving board into a vacuum chamber and created a secondary optical system to calculate the acceleration and size of launched particles. He also helped with data collection related to laser cooling and trapping of nanoparticles.

Wansha, in his junior year, was also invited to join the research group of Jannick Rolland, the Brian J. Thompson Professor of Optical Engineering and director of the Center for Freeform Optics. “I knew about her work, because as you get more into lens design, you learn about freeform optics. That’s her area of expertise.  I really wanted to get into the research side of this, rather than just what you see in industry,” he says. Wansha has worked closely with Romita Chaudhuri, a Ph.D. student, on the calibration and automation of instruments used in a novel freeform optical metrology system.

The lab experiences, Wansha says, have taught him the importance of taking the initiative and “doing things on your own. When things aren’t working in the lab, there aren’t going to be any ‘right answers,’ and you have to be ready to seek answers in some interesting places “

The summer before he enrolled at the University, he interned with Spex Precision Machine Technologies in Rochester. Though Spex is not an optics company, the opportunity to work there was a “formative experience for me in terms of being in a manufacturing setting,” Wansha says. “They let me do CAD design for some of the actual parts that needed to be machined as well as letting me learn the actual G-code that runs the CNC (computer numerical control) machines.”

Last summer, he interned with the optical design team at Corning Inc.’s Advanced Optics Fairport, NY facility—his first exposure to a company doing optical design. “I knew instantly this was the place where I wanted to work,” Wansha says. “We were working on lithography systems which are like microscopes on steroids. They work in the UV (ultraviolet) wavelength range, and have over 20 lenses in them,” he says. “The systems are extremely complex, and the teams there are doing a lot of things that most other places in the world can’t.”

“Their lens design team is very tight knit, and it's a very well-run ship,” says Wansha, who will start working at Corning full time after he graduates. “It is an amazing experience to work there.”

Maximizing his experiences, one day at a time

Wansha is grateful to his parents for supporting his interest in STEM fields, and to the Institute mentors who have helped him. They include Dan Smith, the Institute’s former undergraduate coordinator, who “made me aware of Photon Camp, and helped put feelers out for my first research job. He was really instrumental in all of this.”

Wansha plans to return to graduate school part time after a year or two to earn a master’s degree in optics.

He wants to remain in industry, working in lens design, “hopefully managing a team down the line, or eventually, very far down the line, maybe going into consulting, where people from a variety of fields come to you with some sort of optical problem to solve.”

Wherever he lands, Wansha wants to “maximize whatever experience I’m having each day so I go to bed knowing a lot more than I did waking up that morning.”