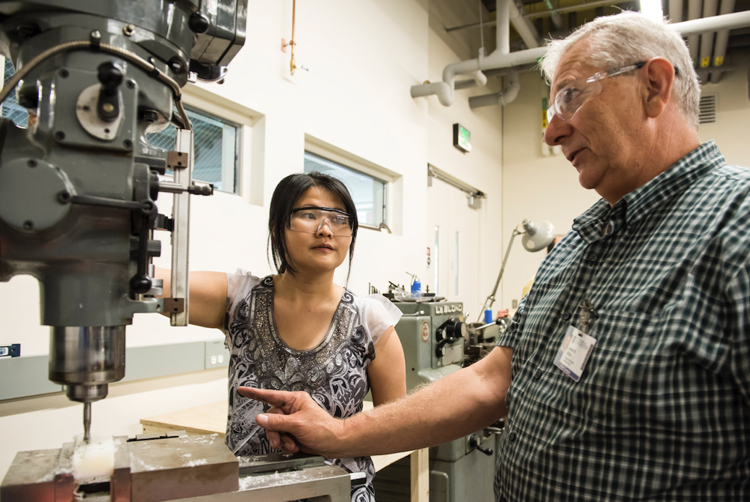 Shwe Pyie, a master’s student in medical device design, received training on a milling machine from Jim Alkins, soon after he joined the University as manager of the Fabrication Shop in Rettner Hall. (Photos by J. Adam Fenster/University of Rochester)

‘My top priority is making sure everybody keeps their fingers’

Amid the whine of saws and the pounding of hammers, Jim Alkins calmly circulates through the Rettner Hall Fabrication Shop at the University of Rochester. “I can tell by the noise if somebody is doing something wrong,” he says.

Students are taking an introductory course on the safe and effective use of basic machine tools— including lathes, mills, band saws and drill presses. They are clearly comfortable asking Alkins for help. Everyone is on a first-name basis. The students relate well to Alkins’ low key, almost grandfatherly manner, and he makes it clear his door is always open.

But certain rules are clear, especially regarding safety. When a student enters the shop to talk to Alkins while the class is in session, she is immediately reminded to put on safety goggles.

Alkins joined the University in 2015, after 33 years with Eastman Kodak Co. During the last seven years, the senior laboratory engineer and Fabrication Shop manager has mentored hundreds of students, at all skill levels. And not just in the classes he teaches.

“Teams like Solar Splash, URMakers, the Robotics Club, Baja SAE and, it seems, countless other clubs depend on him for guidance to get their projects to work,” says Chris Muir, a professor of mechanical engineering, who worked closely with Alkins at Eastman Kodak and lured him to the University. “He also supports the sewing and creative arts club and whoever else happens to walk into the lab.

“I can’t say enough good things about Jim. I am a big fan.”

So is Jim Zavislan, a professor of optics and former associate dean of the Hajim School of Engineering and Applied Sciences, who hired Alkins after Muir recommended him. 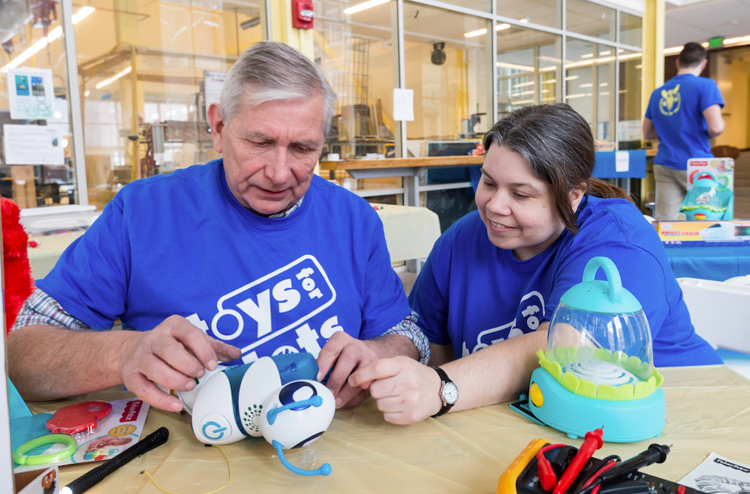 Alkins, shown here with Kristina Abrams, a Medical Center technical associate, gladly pitched in to help adapt battery-operated toys for use by special needs children at Golisano Hospital, as part of a Toys for Tots project.

‘I’ve always been kind of a mentor’

Alkins grew up in nearby Spencerport, where he attended high school. He enlisted in the Navy after graduation and served four years aboard the nuclear-powered cruiser USS Virginia.

Alkins was responsible for maintaining the ship’s electrical communications systems, including “ship to shore communications and anything that communicated between the bridge and engine room,” he says. During several deployments, Alkins says, “I saw a lot of the world,” including the Indian Ocean. That’s where his term of service ended, while the Virginia was deployed during an attempt to rescue US citizens during the Iran hostage crisis.

Back home in Rochester, Alkins joined a small company that made railroad crossings for General Railway Signal Co. —including crossings used for the MTA subway system in New York City.

When he and his wife had their first of four children, Alkins accepted an offer from Eastman Kodak because the company offered better benefits. His duties including heading one of the company’s prototyping machine shops, working with other teams on research and development projects.

“A lot of the work involved experimentation,” Alkins says. As a result, he is listed along with other team members on 12 patents.

Much of the work involved meeting with different departments and customers to make sure the designs for products could be machined to specifications and, if so, to determine whether the products met customer expectations.

This often placed him in a teaching role.

“I’ve always been kind of a mentor to other people,” Alkins says.

‘These are some of the brightest students I’ve ever known’

Even so, Alkins was initially worried about making the transition from industry to academia.

“It was just unfamiliar,” Alkins says.

Now he is right at home.

The best part of his job is “definitely the students,” Alkins says. “These are some of the brightest students I’ve ever known. They’re looking to learn.”

For mechanical engineering students, in particular, “it’s important that they can walk into a machine shop and give instructions to a machinist,” Alkins says. “If they’re sitting at a CAD (computer assisted design) terminal and designing a part that can’t be made, they’re not doing anybody a favor.”

Alkins also enjoys working with various student clubs that make use of the Fabrication Shop and the adjoining 1,600-square foot Fabrication Studio.

The University’s robotics team, for example, “moved in about a year and half ago after losing their lab space,” Alkins says.  Members assembled their autonomous robotic vehicle in the Fabrication Studio earlier this year before leaving to participate in NASA’s Lunabotics competition. Alkins introduced members to the machine shop and increased their skill levels, so that many are allowed to “swipe in” on weekends.

“They have my home phone if they have an issue,” Alkins says.

He has also been instrumental in securing useful donations and attractive pricing on various shop tools, Zavislan says. The Fabrication Studio will soon include a third, high-end 3D printer, for example.

“The shop’s capabilities have grown substantially under his leadership,” Zavislan says. 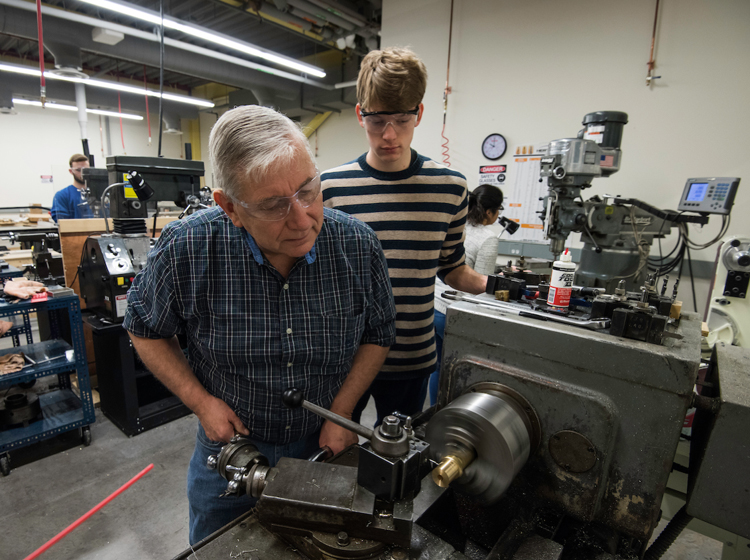 As part of the introductory course Alkins teaches, students complete a project using the various tools they’ve been introduced to in the Fabrication Shop. Alkins encourages them to talk to University faculty and staff for project ideas. “It gives them the additional experience of going out and dealing with a customer,” Alkins says.Here, he helped Ben Martell ’19 mill brass replacement parts for a practice instrument used to train students to perform on the Hopeman Memorial Carillon in Rush Rhees Library.

He helps students ‘gain confidence in themselves and their abilities’

Alkins is not one to draw attention to his achievements. However, they do not go unnoticed.

For example, there is a desk in the Fabrication Studio that was created by a senior design team. It has Alkins’ portrait on it along with “Angel of Rettner Hall.” One of the students on the team painted it overnight– without Alkins’ knowledge.

“She very much appreciated his patience and guidance in the shop,” Muir says. “I think it was one of the things that she very much valued about her experience at UR. Jim always asks me if we should get rid of it and has rearranged it so his portrait does not show – but I like to have it front and center.”

Many of the incoming first generation, low income, and minority students who take his workshop as part of the University’s Early Connection Opportunity program “credit Jim and his instruction for giving them the confidence to fully engage in their engineering studies,” Zavislan adds. “Many of the ECO and other students stop by during their senior week to thank him for all his help.”

Muir notes that students in the Department of Mechanical Engineering routinely invite Alkins to their annual Faculty Roast – “which says something.” A student appreciation for Alkins is always part of the ceremony.

“He is very patient with the students, sometimes unbelievably so,” Muir says. “It is important to him that they not only learn but gain confidence in themselves and their abilities.”