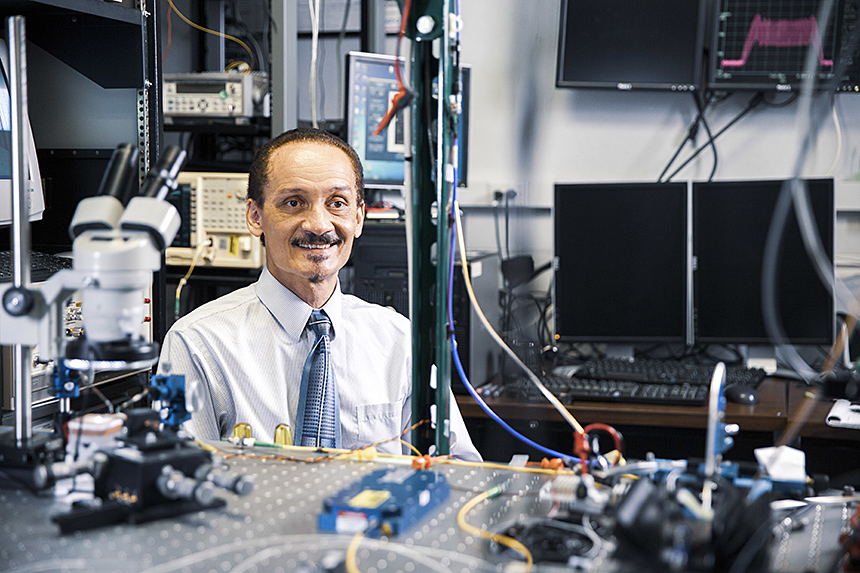 On a rainy Friday night in 1978, a young electrical engineering student at City University sat in his room, scanning a course catalogue to see what electives he should consider.

The course description for Introduction to Lasers and Masers particularly caught his eye. Especially the part that read: “This course will teach the introductory concepts to fiber optics communications.”

It occurred to Peter Delfyett ’83 (MS) that if he were to get a PhD in that newly emerging area, “it could potentially carry me through a career.”

Delfyett earned his PhD, during a “circuitous” degree path that brought him to the University of Rochester for two productive years.

His pioneering achievements in the field include creation of the highest power mode-locked diode laser in the world. He also played a key role in the creation of the first software remote-controlled femto-second laser system for industrial manufacturing.

Delfyett’s peers have recognized his achievements by electing him a fellow of SPIE, OSA, IEEE, APS, and the National Academy of Inventors. He has also served two terms as president of the National Society of Black Physicists.

And this year Delfyett added to his impressive list of awards when he was elected to the National Academy of Engineering, received the Arthur L. Schawlow Prize in Laser Science from the American Physical Society and the William Streifer Award from the IEEE Photonics Society.

Delfyett grew up in Queens. His father, a New York City firefighter who eventually became a deputy chief, and his mother, a factory worker, separated when Delfyett was very young. So, until he was 9, Delfyett and his two sisters were brought up by his paternal grandparents, his father, and his father’s two brothers—“all under one roof.”

It was a very supportive environment for the children, Delfyett recalls. “There was a lot of guidance and an expectation that we should do well in school. That was drilled into us at an early age.”

As early as kindergarten, Delfyett remembers, he would sit on his grandfather’s knees, looking at The New York Times, learning to identify the words. Invariably, his grandfather picked articles about science.

The articles helped spark the young boy’s interest in dinosaurs, which increased after his father took him to see the Journey to the Beginning of Time. Delfyett remembers being “completely captivated” by the movie about young boys who row under a bridge in Central Park, only to emerge in prehistoric times on the other side.

During subsequent Sunday School lessons about Adam and Eve and Noah’s Ark, Delfyett immediately wanted to know why there was no mention of dinosaurs.  “How come nobody put the dinosaurs on a boat?” he would ask.

“I sort of saw a disconnect between what I was learning in Sunday school, and what I was reading about in The New York Times with my grandfather,” Delfyett says. “It helped me grasp this wonderful idea that one could pursue science to get at the truth of what things are made of and how things work.”

Delfyett’s career choice came into sharp focus after he took that introductory course in lasers and masers as an undergraduate at City University. Physics professor Robert Alfano, Delfyett’s eventual PhD advisor, chose a wide range of lecture topics: ultrafast optical pulses and optical clocks, for example, and measuring the speed of atoms and electrons.

“After every lecture I was thinking ‘Wow! This is fantastic!’” Delfyett says. In the lab, Alfano would show Delfyett a colorful laser pulse lasting a picosecond –a mere trillionth of a second.

“And it just seemed so amazing that something so futuristic and high tech was right there in front of my eyes,” Delfyett says. “It inspired me that there could be an opportunity for somebody like me to pursue a career in laser optics.”

After receiving his bachelor’s in degree electrical engineering, Delfyett would have stayed at City University to pursue his graduate studies with Alfano. But there was a problem. At that time, it was rare for a professor in one discipline to mentor a PhD student from another. Alfano only mentored physics graduates.

So, Delfyett applied to the University of Rochester and unwittingly ended up in the same situation – but with a happy ending.

“I was a little naïve when I applied at Rochester,” Delfyett says. “I applied to ‘The Institute of Optics/Department of Electrical Engineering,’ not aware these were two separate academic units.”

He applied himself diligently to completing a master’s degree in electrical engineering but realized after two years that staying on at Rochester for a PhD would limit his ability to pursue his real passion – laser research. Most of that research was done at The Institute of Optics. And the first concern of the faculty there was supporting their optics PhD students.

Despite that, Delfyett does not regret attending the University of Rochester. “It was a wonderful experience,” he says. “I met many, many great faculty members, who impacted me tremendously.”

He even had an opportunity to work one summer in the lab of Gerard Mourou at the Laboratory for Laser Energetics. He met several of Mourou’s PhD students, including Donna Strickland. Strickland and Mourou later shared the 2018 Nobel prize for physics for the pioneering work they were doing in chirped pulse amplification.

In the meantime, back at City University, Alfano had obtained a joint appointment in electrical engineering.  He could now accept Delfyett in his research group. Delfyett returned to City University, where Alfano mentored his doctoral research in ultrafast spectroscopy.

From industry to academia

However, a major change was occurring in industrial research labs across country. To maximize profits, companies were cutting on back long-term, basic research. Bellcore was no exception.

Delfyett recalls the day when an area vice president dropped by during a coffee break to break the news. “Of the 150 people present, 80 percent walked out of the room and began working on their resumes,” Delfyett says. When it became clear that it would be difficult for him to continue his cutting-edge research at Bellcore, Delfyett joined the exodus to academia.

“It was the snow belt, desert or the sun belt, so I chose the sun belt,” Delfyett says. He joined the Center for Research and Education in Optics and Lasers (CREOL) at UCF, where he currently serves as the University of Central Florida Trustee Chair Professor of Optics, ECE & Physics.

Delfyett has continued to excel at UCF, receiving numerous university and national awards for his teaching and research, including a prestigious National Science Foundation Presidential Faculty Fellow Early Career Award for Scientists and Engineers. He co-founded Raydiance, a spin-off company developing high power, ultrafast laser systems, and is a founding member of the NSF’s Scientists and Engineers in the School Program, which teaches 8th graders about the benefits of science, engineering and technology in society.

Delfyett’s current research focuses on using semiconductor lasers—“tiny, tiny devices about the size of a grain of sand,” he explains-- to create short bursts of light for optical communications, for laser radar, and for unique ways to synthesize and analyze signals.

“We develop systems on a 10-foot optical table, then come up with ways to integrate them down so the whole system can occupy a space on a microchip that might be a few millimeters in size,” Delfyett says.

One can easily imagine young UCF undergraduates thinking “Wow! This is fantastic!”—and being inspired to pursue a career in optics. Just as Delfyett was inspired by his mentor 40-some years ago.

The challenge of increasing diversity

The continuing challenge, Delfyett says, is for universities to provide a more welcoming environment for underrepresented minority students—“ if we want the vision of a very diverse STEM workplace to become reality.

“Unfortunately, our society has been structured in a way that can subconsciously influence how people in the majority view the capabilities of underrepresented minorities, particularly in STEM fields,” he says.

“Basically, I was always taught and raised to recognize that this was going to be the reality, that as a minority, you not only have to show that you’re good, but you have to excel well beyond what would be the norm for the majority of the population, just to be considered equal.”

That’s why it’s not enough for universities to create programs to increase minority representation, Delfyett says. Universities also need to cultivate an accepting culture on campuses, getting “buy-in from everyone within the academe, including staff and faculty.”

His advice for underrepresented minority students interested in pursuing a career in STEM?

Go for it-- despite the challenges.

“STEM is a great area to go into,” Delfyett says. “It’s always different, it’s always changing, so you’re always learning something new. In STEM areas, you’re always trying to incorporate new ideas and concepts to further science and expand our knowledge. And that’s a lot more exciting than having a job where you’re doing the same thing over and over for 40 years.