What’s the key to succeeding as an entrepreneur?

Be unreasonable, says Tim Talley ’88. Not obnoxious, mind you, but willing to take what appear to be unreasonable risks, even when everyone you care about tells you not to. 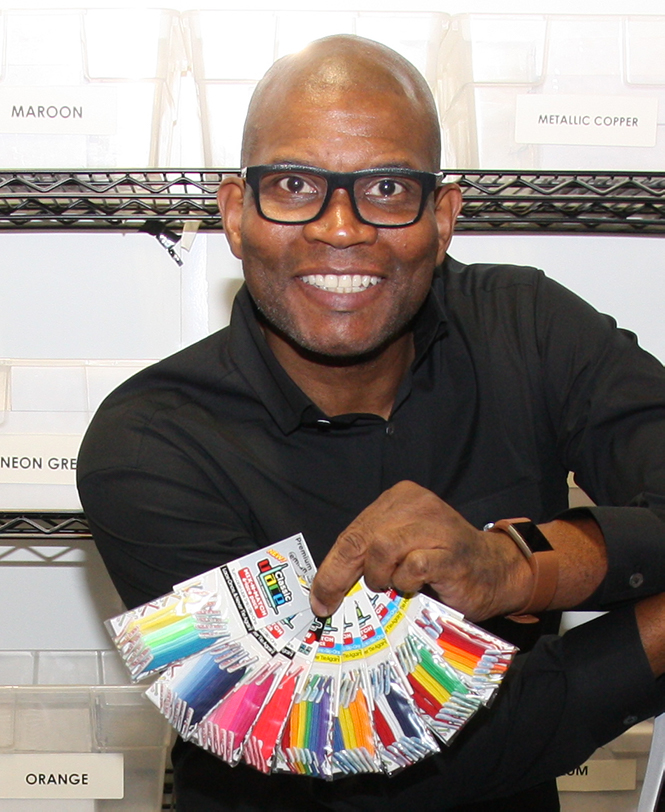 For example, when Talley quit a lucrative, mid-six-figure job to start a business of his own, his friends thought he was crazy. They called him up, trying to get him to change his mind. He went ahead anyway.

When Talley’s new company fell on hard times—when he lost his car, his apartment, and ended up sleeping on a friend’s sofa, no less – he again got the calls. And again, he paid no heed.

Within months, he was wooing a national TV audience and a panel of celebrity investors with a flawless pitch on CBS’ Shark Tank program.

One of the investors, Mark Cuban, owner of the Dallas Mavericks professional basketball team, was so impressed, he invested $200,000 in Talley’s dual-patented modular, no-tie sneaker laces.

The only regret for Talley was the pre-recorded introduction shown to the national audience just before he made his pitch. In it, Talley relates being told that he was outclassed as an engineering student at the University of Rochester, and that he should consider dropping out.

“The rest of the story got left on the cutting room floor,” Talley says.

So, here’s the rest of the story. From the beginning.

Talley grew up in Buffalo, NY, in a blue-collar family. His mother, who had a degree in teaching, had to work in a drug store before being hired as a teacher’s aide. His father, a former high school football star, missed his chance to attend Canisius College on a sports scholarship when the school temporarily suspended its athletic program. Instead, Talley’s father worked in an automotive parts manufacturing plant, ran a print shop in his garage on the side, and rented out three homes in their neighborhood.

“We weren’t quite what would be considered middle class, more upper poor,” Talley says.

“I always had a bike; it was never a question of whether there was going to be food to eat. But my father never had a brand-new car, even though he worked in the auto industry.”

But his father set a good example. From him, Talley learned “you can live a decent life if you work hard, if you do something on the side or start something of your own.”

Early on, Talley wanted to be an athlete. At Hutchison Central Technical High School in Buffalo, he narrowly missed the cut for varsity basketball but made the track team and became a star hurdler.

He also exhibited a knack for entrepreneurship. As owner and sole employee of his first start-up company, he created customized buttons for his classmates and made about $100 a day.

Talley had to pass an entrance exam to get into Hutchison Tech, a celebrated magnet school that was one of the world’s first high schools with a digital computer. Talley picked a concentration in computer electronics.

“Even though I went to a very good high school, I didn't have to really study. It just kind of came easy to me,” he says. “I graduated in the top 8% of my class, but never brought books home with me, because I was able to get work done in school.”

When he was recruited by track coach Tim Hale to enroll at the University of Rochester, Talley was ill-prepared for the rigors of the major he wanted to pursue in electrical and computer engineering.

“I had this impression that freshman year of college would be more of the same, like 13th grade,” he says. “It wasn’t.”

“I didn’t know how to study. Plus, I was running track. Practice was from 3 to 6 p.m., then you went to the weight room, and then you had dinner with the team. I wouldn’t get back to my room until 8 p.m., take a nap until 9, and then crack open the books.

“For some people that was doable, but not for me.”

Near the end of Talley’s freshman year, Sidney Shapiro, then department chair of electrical and computer engineering, called Talley into his office. Shapiro, indeed, suggested that, based on Talley’s work at that point, he was not prepared for engineering and ought to consider dropping out of the program.

“When I look back at what Sidney Shapiro said to me in his office that day, it was actually pretty reasonable. I had to grow up,” Talley later told University of Rochester students during a lecture at the Simon Business School soon after his Shark Tank appearance.

“I had to make decisions that my parents, my professors, and my friends couldn’t make for me if I wanted to achieve my goal of becoming an engineer.”

When he returned in the fall Talley told Shapiro that he was willing to quit track to concentrate full time on his studies. “His response to me was, ‘If you’re willing to make that commitment, I’m willing to make a commitment to you,’” Talley recalls. Shapiro became Talley’s faculty advisor, with one condition: that he would pick one of Talley’s classes each semester until it was clear he no longer needed supervision.

The first class he chose for Talley was numerical analysis.

“We were solving problems which would still take several minutes for somebody to solve using a calculator. But we weren’t allowed to use calculators,” Talley says. “We had to do these problems manually, showing all the work, line by line, on ruled paper. Some of these problems took 15 pages of single line calculations.

“There was no way to fake it.”

But Talley got through it. “Over the course of Professor Shapiro working with me and picking classes for me, my grades went up,” Talley says. “I started getting A’s in classes with PhD students.”

During one upper-level medical imaging course taught by Prof. D.C. Farden, some of the PhD students in the class came up to Farden afterwards asking for help, Talley remembers. Farden told them to check with Talley. “He’ll help you.”

“I knew I had made it,” Talley says. To this day, he adds, he often prefers to do calculations by hand.

Another influential mentor for Talley was Keith Harrison, a Harvard-trained MBA who had been the CEO of Schlegel Company. Talley took two marketing classes from Harrison. “He would pull me aside and tell me ‘I'm sure you’ll be a great engineer, but I really think you would be an exceptional marketing person. If you ever want to go to business school, let me know. I’ll do everything in my power to help you get into a great B-school.’”

Time for a change

After graduating, Talley was hired as a junior engineer at Eastman Kodak in Rochester. The photography film giant was still a sprawling company with multiple divisions, each expected to stand up on its own. Talley’s first assignment: creating “black boxes” so that machinery created in one division could be linked to machinery created by other divisions, so they could “talk to” each other.

Talley was momentarily stumped. Some of the machine manuals were written in German and other languages. Then, fittingly, he remembered a Sidney Shapiro lecture describing “black boxes” as systems that can be viewed in terms of their inputs and outputs (or transfer characteristics), without any knowledge of their internal workings. In two months, Talley successfully completed the project.

At Kodak, Talley proved he could be a good engineer. But eventually he was ready for a change. He followed Harrison’s advice and with Harrison’s glowing recommendations was accepted into several top business school programs. Talley left Kodak to earn an MBA at the Fuqua School of Business at Duke University in 1992.

He then worked for various companies and also started a company of his own – Ballgirl Athletic - during his time living in New York City. He was a product manager at Revlon, for example, and an associate vice president at Merrill Lynch, the wealth management company, before joining New Era Cap Co. as senior director of fashion headwear and as the company’s global trend-spotter.

At New Era, he was patent-holder and sole inventor of record for on-field performance headwear systems worn on the field by all major league baseball players. It is one of 8 patents that Talley holds.

'I use engineering every day’

The entrepreneurial path Talley embarked upon after leaving New Era—despite all that advice not to—has been “like a big, long roller coaster ride, with very high ups and very low downs,” he says.

For example, at one point U-Laces were selling “like crazy” in Japan. Then an earthquake and tsunami hurt that market. Distribution picked up in Europe, only to be slowed by the debt crisis. In 2018, Talley made a deal to sell his product to 3,000 PayLess stores; the chain filed for bankruptcy after receiving the product but before the payment for the product was made.

“We got punched in the gut a few times,” Talley says. But there have been plenty of highs to offset the lows, he adds.

“We’ve shipped probably 10 to 15 million packs of U-Laces around the world,” Talley says. “We have received letters from mothers of special needs kids, and those on the autism spectrum, telling us our product changed their children’s lives, and helped them fit in with everyone else.”

At New Era, Talley would tell his team, “You can look in the rearview mirror and celebrate a successful product for only so long. Once we have a great line out, you have to immediately shift gears and start creating the next great line.” He has done that with U-Laces as well. The product line has evolved as new opportunities arise.

Behavioral health care facilities around the country, for example, buy a U-Lace derivative product—SafetyLace--from Talley’s company to keep their patients from hurting themselves and others. Doctors working long shifts buy U-Laces. When called for an emergency while taking a nap, the doctors save precious seconds by pulling on their footwear that much more quickly, before dashing down the hall.

“So, in one sense we have a fashion product, but there are components that really have an impact on peoples’ lives beyond just looking cool and being fashionable,” Talley says.

People sometimes ask him why he bothered going to engineering school, only to “throw engineering away,” Talley says. “I tell them I use engineering every day in my life and business.”

For example, a friend even recently reminded Talley of how he once used integral calculus to solve a candy re-sizing problem while he was an MBA intern at Nestle Chocolate & Confections.

“The main thing I learned from engineering, and especially from Professor Shapiro, is that there is generally no such thing as a huge, unsolvable problem, but instead a system of smaller, interrelated problems that are easier to identify and easier to solve,” Talley says.

“As you identify and solve these smaller problems, all of a sudden you look up and the big problem is gone.”