Miguel Alonso: ‘A rare and invaluable’ researcher and teacher

Scott Carney, director of the Institute of Optics, speaks in glowing terms when he refers to Miguel Alonso.

“He is a beloved professor, valued colleague and, as an alumnus, an exemplar of Institute excellence,” Carney says. Moreover, he adds, as a researcher “Miguel's outstanding work in theoretical optics positions him as the natural successor to the late Emil Wolf, arguably the most celebrated faculty member in our storied history.”

That is high praise indeed. Wolf was a leading expert in coherence and the polarization of optical fields. He produced pioneering theories in connecting fundamental equations describing electromagnetism to the observable properties of light. Those and similar connections continue to be explored and expanded upon in Alonso’s research.

He is held in high regard by students as well. In 2013, Alonso received the Edward Peck Curtis Award for Excellence in Undergraduate Teaching from the University of Rochester. Students marveled at his ability to enter a classroom with just chalk and a mug of coffee and start filling four walls of blackboards with equations—without once having to refer to notes.

And all the while explaining the connections to real world applications with “clarity and humor.”

Not long after reading about the award, a writer with University Communications saw Alonso striding across the quad between Hutchison and Goergen Halls, chalk all over his jeans, with two students hanging at his side.

“Now I get it,” the writer thought. “That’s what a great teacher looks like.”

Alonso’s father, born in Spain, fled to Mexico as young boy with his family during the bloody Civil War that tore his native country apart. He never returned, eventually becoming an accountant in his adopted country.

“So, I am very sympathetic when people talk about refugees, because I am a descendant of one,” says Alonso, who was born and grew up in Mexico City.

Alonso’s mother, a Mexican, was an accomplished artist. After raising Alonso and his three older siblings, she resumed her passion for painting.

“My parents were always interested in knowledge, so they encouraged us to read and think about things,” Alonso says. Overhearing his older siblings talk about science sparked Alonso’s own interest in science at an early age. Especially when heard about physics—how it applied math to understanding how things work. “I thought that was so cool, and I knew at a very young age that was what I wanted to do.”

However, it wasn’t until he enrolled at the Universidad Autónoma Metropolitana in Mexico City that Alonso narrowed his focus even further – to optics. “I took a class on electromagnetic theory and was fascinated to learn that light is an electromagnetic wave. It was my first experience working with equations that describe light waves.”

After working for a year with a company that manufactures optical fiber cables, Alonso applied to graduate schools. One of his professors told him Rochester was the best place to study optics. So, Alonso put The Institute of Optics at the top of his list – and to this day is grateful he was accepted.

Among the many mentors he benefited from at The Institute, two in particular stand out, Alonso says. He took a course in mathematical methods in optics and physics (which Alonso later taught to Institute students) from Professor Greg Forbes. He immediately sensed that Forbes “thought about things like I do. I really felt a resonance,” Alonso says. Forbes, who became Alonso’s PhD advisor, played a major role in shaping Alonso’s research interests and remains a close friend.

Two years into Alonso’s PhD, Forbes returned to his native Australia to join the faculty of Macquarie University in Sydney. Before joining him there, Alonso had to complete a semester of coursework at Rochester with another member of Forbes’ group. “Emil (Wolf) sort of adopted us,” Alonso says. Wolf, too, became not only an influential mentor, but a close friend.

Alonso joined Forbes in Australia to complete his PhD and his postdoctoral work. He met his wife there. He then returned to Mexico to teach at the Universidad Nacional Autónoma de México (UNAM) for three years.

When he was offered a faculty position at The Institute of Optics in Rochester in 2003, Alonso immediately accepted. “The chance to work with these great people was a wonderful opportunity that I couldn’t let pass,” he says.

‘Our biggest impact is through our students’

“Miguel's world travels and voracious curiosity have produced that rare and invaluable person in the academy, an intellectual's intellectual,” Institute Director Carney says.  “Miguel can deliver lectures on anything from error analysis in metrology, to the group structure and topology of singularities in certain field theories. And he can deliver those lectures fluently in at least four languages.”

“He's also the one you want in your corner when things go wrong.”

As a faculty member at the Institute, Alonso has enjoyed pursuing three main passions:

Fundamental, theoretical research in optics, but also working with experimentalists as well. “So, when we can describe what waves do with a simple, intuitive geometric equation, what are the possible applications for that?” Alonso says. An example is his collaboration with Institute colleague Thomas Brown and Sophie Brasselet, director of the Fresnel Institute in Marseille, France, on a new microscopy technique that, for the first time, can image individual molecules in 3D and capture the way they “wobble.” The work could shed invaluable insights into the biological processes involved, for example, when a cell and the proteins that regulate its functions react to a virus.

Alonso has published over 120 articles in peer-reviewed journals, as well as 7 book chapters. He is a Fellow of the OSA (Optical Society), and currently serves as Editor in Chief of Optics Letters.

Teaching, which “forces you to really understand things well,” Alonso says. “It is very satisfying when you see students appreciate and seem to enjoy the courses and learn from them. I really love that.

“As faculty members,” he adds, “we do things with research that have an impact, but the biggest impact we have is through our students. Each course you teach, you’re influencing a lot of people who are going to influence a lot of people later, so you can have a potentially very positive cumulative effect. “

Communicating with people from different backgrounds, particularly in economically developing countries. “I come from one, so this is something dear to my heart,” Alonso says. With Institute colleague Andrew Berger, he has also worked on outreach initiatives to students in inner city schools in Rochester, and also in districts with limited resources, to help address the continuing underrepresentation of minorities and women in science, technology, engineering and math (STEM) fields.

He and Berger are also leading a project with the FACE Foundation (Supporting French-American Cultural Exchange in Education and the Arts) in which the University, the Institute of Optics and École Centrale de Marseille (ECM) in France will collaborate in offering virtual exchange or other types of global learning opportunities at a time when International education and study abroad have been severely impacted by the pandemic. (Read more here.)

Advice to students: ‘Be passionate; put your heart into it’

Alonso is cautiously optimistic about the increased attention in US higher education and industry to increasing diversity in STEM.  “While we still have a very, very long way to go, I do want to think that things are improving. The fact there is more awareness now is a good thing,” Alonso says.

His advice for Hispanic and other minority students interested in STEM is to “be passionate about it, work very hard, and put your heart into it. It must be an obsession. That means that, at some level, you’re working all the time; even if not consciously, ideas might be cooking in the back of your head. Many of my ideas come not when I’m sitting at a table in my office but when I am riding a bicycle or walking.” (Or, as during a collaboration with Kevin Parker, the William F. May Professor of Engineering, while swimming with his wife in Lake Ontario. Read more here.)

Alonso advises students interested in pursuing academic careers in STEM to “choose your topics well” because of the increased competition for federal research funding, which in turn increases the difficulty of obtaining tenure. That means pursuing a topic of research that is “relevant, and that funding agencies care about.

“I have not always done that,” Alonso says. “Sometimes I do things just because I am interested in them, even when no one else is. But the situation is harder now in becoming a young faculty member.”

(While still a professor at the University of Rochester, Alonso moved to the Institut Fresnel and the Ecole Centrale in Marseille, France, in 2018 as part of a 3-year-long A*MIDEX Chair of Excellence. In 2020, he accepted a position as director of research at Centrale Marseille). 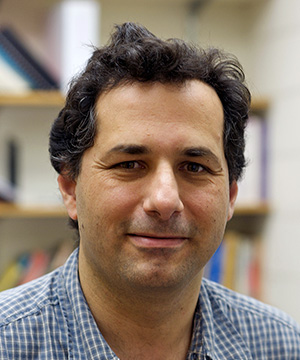