Delali Attiogbe Attipoe ‘03 is helping close a critical gap in our understanding of the genomic drivers of disease.

She is the chief operating officer of 54Gene, a US and Nigerian based health technology company that is deriving insights from the world’s most diverse populations in Africa to solve some of healthcare’s biggest challenges. The company is building a highly curated, unique biorepository and data source of clinical, phenotypic and genetic information from which insights can be generated that lead to new treatments and diagnostics.

This lack of genetic and clinical data from African subpopulations results in suboptimal treatment outcomes for those populations, but also missed opportunities to discover revolutionary drug targets for the global population.

“This is important, because at the end of the day we’re actually all Africans. Modern homo sapiens came originally from Africa, and as a result the most genetic diversity you will find is in Africa,” Attipoe says.

“It’s been a privilege to be able to be a leader of this organization,” she adds. “I’ve been given an opportunity to do a dream job that takes advantage of all the opportunities that I’ve had.”

Those opportunities began on the steps of Wilson Commons at the University of Rochester.

Attipoe, then a prospective student, met a future classmate and lifelong friend. Eventually, her friends’ enthusiasm for biomedical engineering inspired Attipoe to pursue BME as a major as well.

“One of the first lessons that I took away and that I still often reflect upon, is the ability to absorb the positive vibes of others,” Attipoe says.

The decision to pursue biomedical engineering set in motion career-building experiences that have unfolded like a series of stepping stones, each preparing Attipoe for the next stage of her journey.

As a result, “Delali has had a wonderful career trajectory,” says Diane Dalecki, chair of the department. “She is really an amazing BME alum, and she’s had a fantastic career path since she left our department.”

Engineering not an option—at first

Attipoe’s family emigrated from Ghana to the United States in 1978. She was born in Lawrence, Kansas where her father, Emmanuel Attiogbe, a civil engineer, completed his PhD as a researcher at the University of Kansas. The family subsequently moved to Winnipeg, Cleveland, and then to Kuwait, where she attended junior high and some of her high school years at the American School of Kuwait.

“I wouldn’t have been able to come as far as I have without the support of my parents,” Attipoe says. “I’ve also been informed and influenced in the jobs and opportunities that I’ve taken on, because of the global experiences that have been part of my life journey.”

Engineering, she thought, was definitely not an option – at least not the kind of civil engineering her father did, working with concrete and structures, Attipoe says. “As an independent adult in college now free from the hold of my parents, I was trying to run in the opposite direction of what they did,” Attipoe remarks.

However, as she started taking biology courses as a pre-med foundation, Attipoe began to have doubts. “Biology was just something I chose, but I felt like something was missing,” she says. “I was really struggling with that choice in my first semester.”

Then she reconnected with Tia Gueye, the friend she had originally met at Wilson Commons. Gueye, pursuing an optics track in BME, opened Attipoe’s eyes to a different kind of engineering that combined biology and medicine. “Because of what I learned from her, I had a chance to talk with faculty and other students in the BME program,” Attipoe says. The more she learned, the more passionate she became about pursuing biomedical engineering as her major.

Learning to think ‘outside the box’

The BME program at Rochester provided Attipoe with an outstanding foundation of classroom instruction, she says. Even more important, however, was the “phenomenal opportunity to work in various research labs, to do internships, and other programs that helped me understand how to bridge what I was learning in the classroom with actually getting my hands dirty and understanding how things work,” she says.

That led to a research experience in the lab of Richard Waugh, professor and founding chair of biomedical engineering. “That experience of working in a lab was my first internship in a sense,” Attipoe says.

She was actively involved with the National Society of Black Engineers and Biomedical Engineering Society student chapters, attending conferences, networking, and learning about additional opportunities. This resulted in an internship with Merck her sophomore year. “I was actually able to use the theory of mass transfer I had learned in some of my classes for some of the big equipment they were using to produce and manufacture their drugs,” Attipoe says.

One of the most rewarding experiences, she says, was her senior design project. The BME senior design program at Rochester is a model in matching student teams with real-world projects sponsored by outside companies, nonprofits, and Medical Center clinicians. At the time, many of projects were heavily focused on mechanical applications.

However, Attipoe and her teammates received permission from Amy Lerner, the director of senior design, to “think outside the box” with their own project: a transdermal patch for delivering an asthma medication without having to swallow pills. Attipoe had a personal interest, because she suffers from exercise induced asthma. The team worked with a Medical Center clinician. Attipoe and teammate Ryan Burke even continued to work into the summer after graduation on filing a provisional patent.  “We were really excited about that,” Attipoe says.

“Being able to do that was really a key cornerstone that I’ve been able to carry with me the rest of my career.”

In short, the BME program at Rochester “taught me how to critically approach problems, how to analyze things, and how to think outside the box,” Attipoe says. “This has really served me well in every role that I have had an opportunity to take on, whether that was being a vendor lead, or being a product manager, or leading teams.”

Attipoe subsequently earned a master’s degree in biotechnology from the University of Pennsylvania and a master’s in business administration (MBA) from Babson College.

However, the career experiences that contributed the most to her work with 54Gene began when she joined the Operational and Rotational Development Program (ORDP) at Genentech, the American biotechnology corporation in San Francisco, which later became a subsidiary of Roche.

The ORDP program is a two-year leadership and development program for students fresh out of graduate programs. “I had the opportunity to rotate through many manufacturing and lab projects. It was a great opportunity to gain insights into how we make biotech products,” Attipoe says. For example, she worked with two cancer products, learning the entire manufacturing pipeline from fermentation to “actually getting the product out the door to patients. These were critical experiences in the early days of my career,” she says.

Two experiences were pivotal in starting her to think hard about not just patient supply, but patient access. A friend on LinkedIn contacted her about a six-month-old child whose family could not get access to a drug. Time was off the essence.

“The great thing coming out of that story is that we were able through our network to get the product to that child, in time, but it made me question: ‘Is that the way that we have to go about getting access? Why weren’t there easier channels?’” Attipoe says.

Then, during a visit to her extended family in Ghana, Attipoe came down with malaria. Again, Attipoe had to rely on a network of close friends to get the medication she needed.

So she began working with a Genentech group called Access Solutions, a program that helps patients access the company’s medicines, regardless of ability to pay.

Then, after 13 years at Genentech, Attipoe was given an additional opportunity to address the patient access issue, as Roche’s Head of Market Access for East Africa. “We were looking for creative ways to ensure access, regardless of what income a patient might have. We thought through what sort of partnerships we could form with countries and/or NGO’s and hospital institutions to deliver needed treatment to those patients.”

“That really was a culminating point for me. I came back after my time in Kenya, committed to continue the great work within the Genentech-Roche organization, but then the opportunity to work with 54Gene came knocking.”

As chief operating officer of new company that is still scaling up, Attipoe wears many hats.

“I’m a lot more in tune with the finances, than I ever was at Genentech or Roche,” she says.

She is involved in virtually all aspects of the company’s operations, ranging from ethical considerations such as informed consent, to job creation, to use of solar panels at 54Gene facilities to maintain a more eco-friendly energy footprint.

Before COVID-19 put a damper on travel, Attipoe spent a lot of time traveling to nations across the continent to explore opportunities to establish a presence outside Nigeria.

When the pandemic hit, the company was able to use its talented personnel and experience in molecular techniques and instrumentation (e.g., RT-PCR) to help increase COVID testing capacity within Nigeria ---even deploying mobile labs throughout the country. In addition, the company has been able to build a world-class laboratory containing sophisticated sequencing and genotyping equipment to help with its data generation efforts for understanding the genetic mutational drivers behind disease.

So this really is a “dream job” for Attipoe.

She remains ever mindful that she has been supported on the shoulders of many – beginning with the conscious and unconscious influence of her parents, the lifelong friend she met on the steps of Wilson Commons, the mentors like Beth Olivares, Rick Waugh, and Amy Lerner at the University of Rochester, and several other mentors throughout her career.

“I am still growing and learning to this day, because at the end of the day, it’s still all about Meliora: how are we always becoming better.” 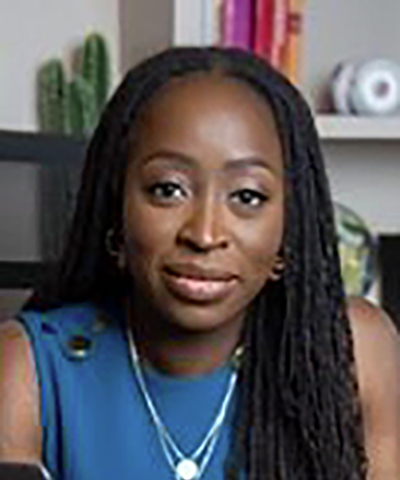