“It’s amazing how our dreams can turn into reality once we find individuals who seriously believe in what we do. Keep chasing after your dreams and keep pursuing that idea,” says Frederico.

He has found individuals who believe in what he is doing at the University of Rochester, where he has multiple opportunities to continue pursuing his dreams.

Originally from Luanda, Angola, Frederico is an alumnus of the African Leadership Academy. Rochester has welcomed more of the ALA’s alumni than any other US university.

“The University has afforded me so many opportunities,” Frederico says. “It’s allowed me to find out exactly what I want to do in life and has made me believe I can actually make an impact in my community and the world at large.”

In addition to participating in the Grand Challenges Scholar program, Frederico:

He was also a member of the varsity track and field team for two years.

Here’s AQ&A with Frederico about the GCS program:

Q.Why did you decide to apply for the Grand Challenges Program?

Almost 90% of the economy of my country, Angola, is dependent on oil and gas. In same manner, 85% of the world’s energy comes from fossil fuels. This shows how critical and substantial fossil fuels are to our economies.

However, the exploration and burning of fossil fuels is one of the threats to creating a sustainable future as it’s one of the biggest contributors of carbon dioxide in the atmosphere, thus causing global warming. Accordingly, throughout my undergraduate career I decided to address the grand challenge of developing carbon sequestration methods by enhancing my knowledge through my mechanical engineering courses, research and internship.

I believe carbon sequestration is an effective solution because the main idea is to maintain the use of fossil fuels and redirect the path of carbon dioxide somewhere other than the atmosphere. This way, we will keep benefiting from fossil fuels as it is supplying a great amount of energy that the world needs and at the same time keeping our environment clean.

This will allow developing nations to utilize their non-renewable resources effectively without harming the environment, and at the same time, it will give them the necessary transition time to have enough infrastructures and resources to invest in renewable energy.

Q. Which of the five competencies did you most enjoy completing? Why?

I enjoyed the global competency the most. For this competency, I had the privilege to intern at Chevron Angola last summer, where I had firsthand interactions with Chevron engineers through the projects that I was part of. The Greater Takula simplification project was one of them. The aim was to optimize oil and water processing facilities in specific terminals to reduce offshore flaring and improve LPG (Liquid Petroleum Gas) production. My task was to compile line lists and tie-in lists. I was required to learn how to interpret Piping and Instrumentation diagrams (P&IDS).

This project has allowed me to see the possibility of completely eradicating carbon emissions by using the right equipment and systems. I have learned that before we think of paths to redirect the carbon dioxide, we should think of maximizing the use of machines such as pumps and compressors that would greatly reduce the amount of carbon that is released in the atmosphere in a safe manner. Then that’s when we can start thinking of the different paths to redirect carbon dioxide.

Chevron aims to be flaring free by 2030. Financial compensation for executives and most other employees is linked to achieving flaring reductions. Chevron has invested more than $75 million in carbon capture storage research and development over the last decade. These types of initiatives by Chevron have drawn me to the company. I aspire to impact the lives of people through emerging technologies, by being part of a workforce that creates affordable, clean and reliable energy.

Q.Are there things you learned while completing the competencies that you would not have learned in a classroom or lab? For example?

Yes, I have learned various technical skills that will be very beneficial in my professional career. For example, during my internship for Chevron, I learned how to interpret piping and instrumentation diagrams, compile tie-in lists and line lists and read ASME process piping codes. These are skills that I could not have learned in a classroom or a lab but are very beneficial to the field I want to pursue.

Q. After you graduate, do you think you will want to continue to work or pursue graduate studies in the same field as the challenge you tackled? How will you do that?

Yes, I will continue to work in the same field. I have received a full time offer from Chevron Angola. I will be working as a facilities engineer. Among the projects I will be part of is the Greater Takula Simplification project, which has the fundamental aim of reducing carbon dioxide emissions.

Q. How did being at the University of Rochester help you complete this program?

The University has provided me with most of the opportunities and platform needed to complete all the five competencies. I conducted a research on liquid metal batteries at the mechanical engineering mixing lab. I founded my own company KBH Consultancy together with some Rochester students, and I have taken entrepreneurship classes. All of these components helped me complete the required competencies.

Q. What is the value of the Grand Challenges program for a student?

From my experience, the Grand Challenges Program is a great way to help students choose a career focus. Often as students we find ourselves involved in many activities and projects, and it’s hard to find an area where one should be focused. This program helps you connect all your projects and activities into one single topic, which I believe I can help someone find their career focus. 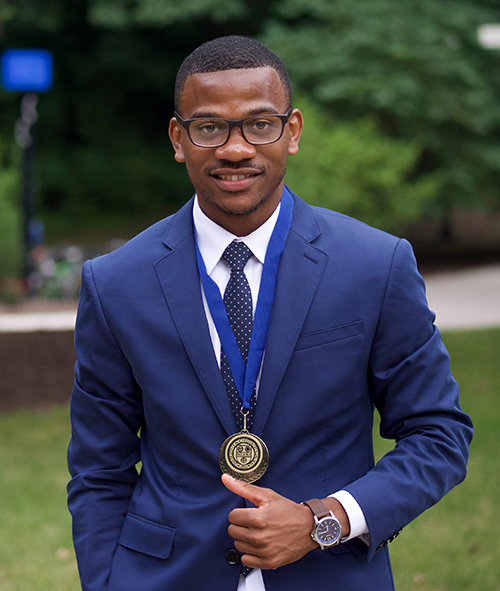