An early career scientist in photonics, Sean Rodrigues ‘12, reflects on opportunities at the University

“At (the University of) Rochester, I met some of the smartest people in my life,” says Sean Rodrigues ’12, a chemical engineering alumnus who is now a senior scientist at Toyota Motor Engineering and Manufacturing North America. There he leads research projects in photonics that have totaled over a million dollars and has submitted 30+ patent applications in his two years at the automotive company.

“My closest friends from being an undergrad are a great example of the people Rochester turns out,” Rodrigues says. “I have a friend who was a captain in the military and is now at Wharton, another who brought Boston commuter rail lines from 77% on-time arrivals to 95%, another who graduated from Harvard neuroscience, two others at top medical schools, and one leading innovative cell therapy at CRISPR. There’s a lot of ambition at Rochester. It’s an aspirational hub to jumpstart your career.”

To his credit, Rodrigues took full advantage of the opportunities the University presented him and was unfettered when faced with setbacks.

When he became uncertain during his first year about majoring in microbiology as a freshman in college, Rodrigues spoke with Nick Valentino, then assistant director for college programs at the University’s David T. Kearns Center. The Kearns Center strives to expand the educational pipeline through graduate school for low-income, first-generation college, and underrepresented minority students.

With Valentino’s encouragement, Rodrigues wound up switching to chemical engineering, and became a Kearns Scholar as a freshman, a McNair Scholar as a sophomore, and a Xerox Engineering Research Fellow as a junior.

The financial aid he received through the Kearns Center enabled him to pursue additional summer research opportunities. “I probably wouldn’t have gotten my foot in the door with that first chemical research position without the Kearns Center, and I just kept getting into more programs from there,” Rodrigues described in a Rochester Review article.

Valentino was “always behind me, even when I didn’t have the confidence to pursue a goal, he would always back me, saying ‘give it a shot. Just try.’ He kept me accountable,’’ Rodrigues says.

Valentino, in turn, praises Rodrigues as “one of my all-time top 10 favorite people. One of his best qualities has been his resilience.”

Rodrigues grew up in Stoughton, Mass. His father is an engineer; his mother is a human resources director. Rodrigues garnered qualities from both parents. “My mom is really good at reading people,” Rodrigues says. “She has a knack for identifying someone’s innate personality despite having met them only once or twice. I was fortunate to have attained emotional intelligence from my mother.”

Rodrigues first became interested in science in his freshman biology class in high school. While the class was rumored to be difficult, he set out to learn as much as he could from his teacher William Fedora, Rodrigues says. “He taught the class from basic principles and tested us as though we were scientific consultants analyzing a problem. He didn’t just have you memorize vocabulary – we were solving problems on the fly, in situations we hadn’t been posited before.”  Rodrigues was also lucky to have this teacher support his early science fair projects, “When you have someone who supports you like he did, it places an incentive on you to perform at a higher level.”

Two factors sparked his interest in attending the University of Rochester. While still a junior in high school, he received a Bausch & Lomb Scholarship from the University. “I suspected that if the university valued science enough to give me an award for it in high school; it would be the ideal school for me,” Rodrigues says. The second factor was qualifying as a first-year student for a Portable Research Grant, which offered select students $3,000 in funding for a research project to be carried out while at Rochester. “That was a huge plus for me,” Rodrigues says. (The grant enabled him to attend a 2011 conference on trends in nanotechnology at Tenerife, Spain.)

Rodrigues arrived at the University intending to major in microbiology--until he googled salaries in the field, and realized he wanted to earn more than that if he were to pay off his school loans quickly.

The switch to chemical engineering addressed that issue, and also led to a summer research experience at Northwestern University working on plasmonics and optics in his junior year. “At the time I knew little about nanotechnology, but I knew it was ‘the future,’ so I was extremely excited about it,” Rodrigues says.

Fortunately, the University of Rochester’s Institute of Optics is not only the oldest optics degree program in the United States but one of the best. Upon returning from his internship, Rodrigues emailed Lukas Novotny, then a professor of optics and physics at the University, and a leading expert in nanoscale plasmonics.

Rodrigues spent his senior year working with Novotny on redesigning the fabrication process of gold-pyramidal nanoprobes for applications in near-field optical spectroscopy.

When he first met the professor, “Lukas was so relaxed,” Rodrigues says. “He’s recognized as one of the leaders in plasmonics; he has written one of the most cited texts in the field. Knowing his prestige and pitting that against his personality was such a surprise when I first met him. I was lucky to join his team and engage in the relaxed, yet prolific atmosphere that Lukas encouraged.” (Novotny is currently professor of photonics at the Department of Information Technology and Electrical Engineering at ETH Zurich, a public university in Switzerland.)

Rodrigues applied for graduate school with every intention of eventually entering academia as a professor. He was accepted at the Georgia Institute of Technology as a PhD student in electrical and computer engineering.

First, however, he had to take a preliminary exam in electrical engineering, because he lacked a bachelor’s degree in that discipline. Rodrigues drew on the confidence he had acquired at Rochester and took this setback in stride.

“Rochester taught me I can do any engineering,” he says.  “They gave me the math skills, and it was just a matter of reapplying them in a different light.”

Even so, Rodrigues had come out of the University of Rochester “with some loans, not a ton, but enough.” He needed to land a faculty position right out of grad school.

It was not to be.

“I landed several interviews and even reached two on-site interviews at the University of Colorado Boulder in the Chemical Engineering department. I was told I was the first graduate student in 35 years to interview for their top 10 department. In the end, it didn’t work out.” Rodrigues says. “Typically, they want someone who looks a little older. At the time I was 28. You have to look the part. It’s pretty hard to earn the confidence of the department without a postdoc.”

Some people take six years to complete a postdoc, Rodrigues says, and “there was no way I would be able to afford to pursue that route with my loans in tote.”

Instead, he opted for industry. He secured a position as a senior scientist at the Toyota Research Institute of North America (TRI-NA).

As it turned out, the position allows him to do many of the things he would do as a faculty member, Rodrigues says. “I didn’t know as a graduate student that a job like this existed and it turns out that not many academics do either.”

Rodrigues leads projects related to photonic computing, the advancement of displays, and autonomous vision hardware. The goal is to expand TRI-NA's capabilities and to push the boundaries of today’s autonomous vehicle systems.

As part of his job, he still publishes papers, just as he did in academia. Part of his work involves recommending research projects that he believes will impact the future of the company. He then provides up to $200,000 a year in funding to university researchers to work on those projects collaboratively or uses the funding for projects in his own photonics lab.

No, his position does not enable him to do the teaching he enjoyed as a graduate student and would have enjoyed as faculty member.

“However, I still get to have an impact on graduate students in universities, because I work with them and their advisors pretty frequently,” Rodrigues says.

“While at my current job, I will continue to advance the state-of-the-art in photonic research. I’ll always seek out solutions to emerging industrial problems by evaluating them from different angles, thereby helping me find new research themes. I foresee my ambition anchoring me to fundamental research throughout my career.”

Rodrigues acknowledges encountering bias and condescension because of his appearance and Hispanic background. “I grew up with people making jokes about me jumping the fence to get to the US. Or I’ve overheard ‘It’s just because he’s Mexican,’” Rodrigues says. “I think there’s a lot of ignorance out there and while it may seem burdensome I think the best way to address these comments is with education.”

In response, Rodrigues says, he has volunteered at STEM-related functions to encourage underrepresented minorities and women to persevere in fields where they have not been traditionally welcomed.

As an undergraduate at the University of Rochester, for example, he was co-president of a student group that tutored a small refugee community. The group set up a transportation system so that the tutoring became a two-way street—tutorees visiting the campus but tutors also going off campus to teach at the source, impacting a larger community.

At the Georgia Institute of Technology, Rodrigues was awarded funding from SPIE, one of the two international optics societies, to host a “Day of Light” workshop to acquaint students with the prevalence of optical technologies in their daily lives—and illustrate the career paths they could take to become optical engineers and scientists. Most of the kindergarten through 12th grade participants were from underrepresented groups.

Today, Sean sits on the Industrial board of advisors for the chemical engineering department at the University of Rochester. He hopes to create a strong partnership with the department.

In his own way, Rodrigues is paying forward the advice of Valentino and other mentors, who saw in him possibilities he would never have imagined—and urged him to “give it a shot. Just try.” 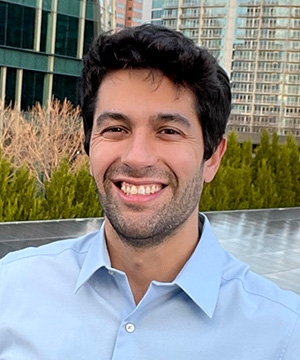