Despite a passion for the arts, Joan Ewing studied chemistry at Nazareth College in Rochester and went on to become the first woman to receive degrees in electrical engineering at the University of Rochester, completing a master’s degree in 1967 and a PhD in 1973.

This was the first PhD in engineering earned by a woman at the University of Rochester. Ewing was also the first woman to receive the distinguished alumna award from the University’s School of Engineering and Applied Sciences in 2000, soon after completing a 40-year career as a researcher with Xerox Corp.

Ewing received her PhD at a time when less than two percent of engineering doctorate recipients were women. "I had absolutely no thoughts of being any kind of pioneer," she later explained. "But I remember learning from Nazareth professors that we have potentials that can be converted into actuals."

Ewing converted her potential in many ways.

Ewing was born in Rochester on August 7, 1933. She graduated with honors from Nazareth College in 1955 with a BS in chemistry, then from Fordham University with a master’s degree in 1957. Her PhD thesis at the University of Rochester, “A study of the surface properties of silicon,” was supervised by Lloyd P. Hunter, a professor in the Department of Electrical Engineering.

When Ewing joined what was then called The Haloid Corp. (now Xerox), “it was small, family-oriented, personal,” she recalled. “Joe Wilson (former Xerox president credited with bringing xerography from the lab to the marketplace) went around shaking hands with everybody. If you did something interesting at work, everybody knew about it. The company was poor. We didn't have a lot of money, but we felt like we were on to something.”

During a 40-year career as a researcher of electrical properties and materials with Xerox, she was awarded 24 patents, mostly related to image reproduction. She spent much of her time towards the end of her career coming up with mathematical formulas for working with prototype electrical devices for new copiers. Ewing retired from her position as Principal Scientist, Advanced Products and Technology, in 1997.

A hard-of-hearing person since childhood, Ewing worked actively with community groups to help other persons with the same problem. She helped churches update their sound systems, for example, and toured nursing homes to make sure there was equipment for hard-of-hearing residents.

“You learn to be more resourceful when you can’t do certain things,” she told the Rochester Democrat and Chronicle.

She was a gifted artist, an avid hiker, kayaker, world traveler and motorcycle enthusiast -- and a staunch supporter of Nazareth College. In 2010 she pledged a $100,000 gift towards a new integrated math and science building after 6,071 of the college’s alumni and friends met her challenge by making contributions of their own. The building opened in August 2012. 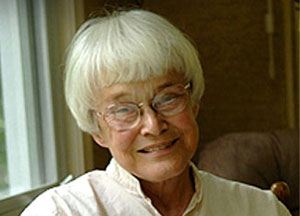