A leader in artificial intelligence

When Diane Litman ‘82M ‘86PhD entered the College of William and Mary in Virginia, a freshman roommate advised her to not take computer science. “Don’t bother—it’s just like typing,” her roommate insisted.

Fortunately for the field of computer science, her physics advisor convinced Litman otherwise. She enrolled in an introductory programming class and ended up majoring in computer science and mathematics.

Now a professor of computer science at the University of Pittsburgh. Litman is noted for her work in the areas of artificial intelligence, computational linguistics, knowledge representation and reasoning, natural language processing, and user modeling. Her work has included both fundamental research and applied research resulting in technology transfer and patents. Litman’s most recent research has been in the area of Speech and Natural Language Technology for Educational Applications.

She has been chair of the North American Chapter of the Association for Computational Linguistics two times, and in 2017 was named as a Fellow of the Association for Computational Linguistics. “The Fellows program recognizes ACL members whose contributions to the field have been most extraordinary in terms of scientific and technical excellence, service to the association and the community and/or educational or outreach activities with broader impact.” She has also co-authored numerous award-winning papers and was awarded senior member status by the Association for the Advancement of Artificial Intelligence in 2011, an award designed to honor those who have "achieved significant accomplishments within the field of artificial intelligence."

Litman began her graduate studies at the University of Rochester in 1980, after a summer spent backpacking in Europe. She described the academic environment at the University as a “particularly exciting yet pleasant one” and became the first woman doctoral graduate in the Department of Computer Science. Her PhD dissertation was on “Plan Recognition and Discourse Analysis: An Integrated Approach for Understanding Dialogues,” supervised by Prof. James Allen. While at Rochester, she also learned that “weather does indeed matter” (although after ending up in Pittsburgh and loving the city, she realizes that other things matter more), and also learned to cook, specializing in homemade pasta.

Before joining the University of Pittsburgh, she was principal technical staff member in the Artificial Intelligence Principles Research Department, AT&T Labs - Research as well as an assistant professor of computer science at Columbia University. At Pitt, she is also a senior scientist with the Learning Research and Development Center (LRDC) and since 2010 has served as (co)-Director of the graduate Intelligent Systems Program.

“There’s a lot of excitement about AI,” she said recently in a Pittwire news story. “One misconception is that people want to use AI to replace teachers and other workers, but that’s not at all where the research is headed.”

Rather, Litman said, the future lies within how AI can be used in tandem with teachers to facilitate tasks that the computer can do more quickly and easily—freeing teachers to devote their time to more complicated aspects of the job, such as guiding classroom discussions or making sure students are getting equitable opportunities to learn in class.

She said that there’s a lot of interest in using AI to develop systems to support personalized education—like giving students more personalized feedback on their work.

See also a profile of Litman in the fall 2007 Multicast newsletter of the University of Rochester Department of Computer Science. 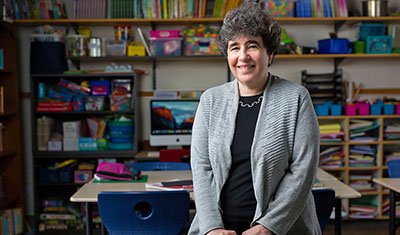