The ‘curse’ that turned out to be a blessing

Theophano Mitsa '88M '91PhD did everything right to prepare herself for a career in her native Greece.

She scored high on college entrance exams. She graduated near the top of her class in electrical engineering at Aristotle University of Thessaloniki.

Mitsa, a single child whose parents were of modest means, “had no connections in any political party, which was the surest way of getting a job in Greece then,” she says. “No close relative in a bank, utility company, or government office who would put in a good word for me. To put it simply, I was toast.”

So, she took a six-hour bus ride to Athens with her mother to apply for a Fulbright scholarship. She was accepted at the University of Rochester, one of her top choices because of its imaging processing program.

As a PhD student working with Professor Kevin J. Parker, she co-invented Blue Noise Mask. The widely used image compression and display (halftoning) technology proved to be one of the most lucrative in the University’s history. It earned Mitsa a University of Rochester Eastman Medal, a Hajim School Distinguished Alumni Award, and perhaps most importantly, the financial wherewithal to pursue her interests “without worrying about budgets, deadlines, and grumbling bosses.”

She has made the most of that opportunity. Her research, writing and consulting in medical imaging and data science has spanned academia and industry, resulting in 11 patents, 47 journal and conference publications, and a book, Temporal Data Mining (CRC Press, March 2010).

A change of course

At times, the invention of Blue Noise Mask seemed as much as curse as a blessing, Mitsa says. Some companies, instead of paying licensing fees, went ahead and developed their own versions.

During the protracted litigation over Blue Noise Mask patent rights, their opponents’ legal strategy was to first deny any violation took place. Losing that, they would argue that the technology they used was different in important ways. When that failed, they’d argue that the patent was invalid, sometimes attacking the inventors’ integrity to do so.

Some prominent professors in her field were engaged as technical experts for the other side, Mitsa notes. “It was not a great environment for the publishing activities of a budding assistant professor.”

So, she switched the emphasis of her research from halftoning to data analysis in medical imaging. The “curse” turned out to be a blessing in disguise. During five years as an assistant professor at the University of Iowa, she collaborated with researchers on new techniques for the detection of emphysema, was awarded several patents in medical imaging, and received a prestigious Whitaker Foundation award.

As lead project integrator/senior applications engineer at GE Healthcare from 1996 to 1999, she led the software team for the development of an imaging application that measures the amount of cardiac calcification from cardiac CT images. She also managed the software development process of an MR image filtering software product, which enhances the quality of MR images.

And as a data science/machine learning consultant, she helped an algorithm team at Harvard University develop a method for the early detection of diabetic neuropathy.

Along the way, she became interested in a type of data analysis called temporal data mining and wrote the only book in the field.

Most recently she has been the managing member of Aretisoft, LLC, a machine learning/data science consulting company.

The Blue Noise Mask co-invented by Mitsa and Parker was eventually licensed by more than a dozen companies, generating $54 million in royalties for the University of Rochester.

The dollars allowed the institution to invest in new faculty, programs, and buildings. This kick-started what Parker has described as a “virtuous cycle” in which invention begets funding that—once reinvested in teaching and research—begets more invention. That, in turn, brings in more royalties, to the benefit of the institution, its faculty, and students.

In retrospect, Mitsa says, “the University of Rochester gave me the best and most important educational experience in my life. It was much more than a degree. It defined a lot of my fights, a lot of my successes, a lot of who I am today.” 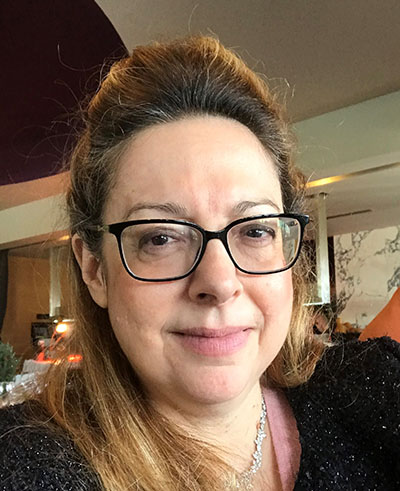