Inspiring students, just as she was inspired

Sharon Weiss '99 '01 MS '05 PhD was still a “wide-eyed freshman” when she joined the research lab of Philippe M. Fauchet at the University of Rochester. It was the start of a “long and exciting journey” to her PhD in optics, she wrote in her dissertation.

Now she is helping other students begin their own exciting academic journeys as a professor of electrical engineering, physics, and materials science at Vanderbilt University. Weiss has supervised 16 PhD and 6 Master’s students, with 7 additional PhD students in progress. In addition, she has served on 49 dissertation committees, supervised 50 undergraduate students, and mentored two high school students and one high school teacher.

Weiss received the School of Engineering’s Excellence in Teaching Award in 2016. She teaches electrical engineering courses in electromagnetics, optoelectronics, and nanophotonic devices. “Her teaching ratings are substantially above the school norm, and students routinely call her the best professor they’ve had at Vanderbilt,” the school reported.

A leader in her field

In 2019 Weiss also received the University’s Chancellor’s Award for Research. Vanderbilt’s Interim Chancellor recently commented that Weiss’s research “marks an enormous leap forward in the interplay of optics and electronics. [Her] work has received significant praise from both technical and mainstream media outlets for its groundbreaking discoveries.” Weiss holds 7 patents for her inventions.

Weiss, who is a Cornelius Vanderbilt Chair in Engineering and Director of the Vanderbilt Institute of Nanoscale Science and Engineering, is a pioneer in studying the interaction of light with nanomaterials and has earned an international reputation for expanding the use of silicon in photonics and optoelectronics. She also is recognized as the leading expert in designing and demonstrating highly sensitive porous silicon guided-wave optical biosensors for applications including medical diagnostics.

She was the recipient of a Presidential Early Career Award for Scientists and Engineers, a National Science Foundation CAREER Award, and an Army Young Investigator Award. Weiss is a fellow of the Society of Photo-Optical Instrumentation Engineers (SPIE) and the Optical Society (OSA), as well as an Institute of Electrical and Electronics Engineers (IEEE) Photonics Society Distinguished Lecturer.

Weiss excelled as an undergraduate at the University of Rochester and won a Goldwater Scholarship. She was elected to Phi Beta Kappa as a junior and to Tau Beta Pi. She received the Charles L. Newton Prize, which is awarded to students showing special proficiency in an engineering subject and conducting research, giving a presentation, or publishing a paper. She was president of the University’s Materials Research Society student chapter and a member of SPIE, OSA, APS, and IEEE.

She received a National Defense Science and Engineering Graduate Fellowship from the Office of Navy Research and a Robert L. Sproull Fellowship from the University to support her graduate research.  Her research also benefited from use of the Materials Lab at the Laboratory for Laser Energetics where she collaborated with Ken Marshall and the late Prof. Stephen Jacobs.

Weiss’s PhD dissertation on “Tunable Porous Silicon Photonic Bandgap Structures: Mirrors for Optical Interconnects and Optical Switching,” was supervised by Philippe Fauchet, a Distinguished Professor (and later chair) of Electrical & Computer Engineering, and a professor of optics, materials science, and biomedical engineering.“The camaraderie in the Fauchet group is truly unique and enables everyone to achieve their full potential,” Weiss wrote in her dissertation. “The summer barbecues, group birthday celebrations, movie nights, potluck dinners and foosball tournaments were just as important parts of my thesis as the research results that fill this dissertation.” Weiss and Fauchet are together again as Fauchet was named dean of engineering at Vanderbilt in 2011 – the same year he received the William H. Riker University Award for Excellence in Graduate Teaching at Rochester.

Weiss has maintained close ties with her alma mater. Hajim School faculty and students have benefited from several of her guest lectures. Most recently she spoke on “Achieving Ultra-High Energy Density in On-Chip Photonic Resonators” at the Institute of Optics. 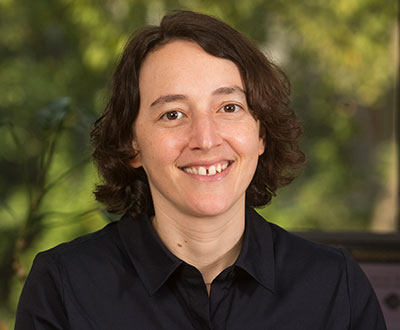